Hurricane Douglas moves toward Hawaii — impacts likely over the weekend 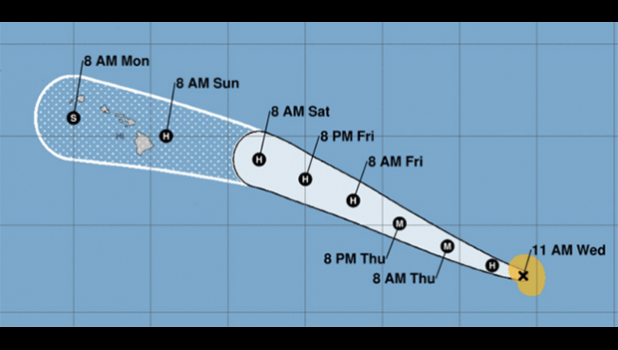 Honlulu, HAWAII — Hurricane Douglas is continuing to strengthen as it barrels toward the Central Pacific and could move over or near portions of the state over the weekend.

While the forecast track is still subject to change, forecasters say that Hawaii residents should prepare now for the threat of heavy rain and strong winds from Douglas.

Any impacts likely will begin to occur as soon as Saturday.

Mayor Kirk Caldwell on Wednesday urged residents to prepare for potential impacts. He said even if Douglas weakens to a tropical storm, it could still leave behind a big mess.

“We know from past experience that it’s not always a hurricane that can do the damage,” Caldwell said. “On top of the pandemic, we now have a hurricane. We need to be prepared.”

The current forecast track brings it into the Central Pacific sometime Friday as a hurricane as it moves through an area of higher sea surface temperatures.

Douglas is expected to weaken as it moves through an area of cooler sea surface temperatures, but it will not encounter much wind shear.

That means it could still be a Category 1 hurricane as it approaches waters just to the east of the Big Island on Sunday morning.

With a gradual weakening, “this forecast increases the chance that Douglas could maintain hurricane intensity as it approaches the Hawaiian Islands,” the National Hurricane Center said.

“There is an increasing chance that strong winds and heavy rainfall could affect portions of the state beginning on Sunday. Interests on the Hawaiian Islands should continue to monitor the progress of Douglas and the official forecasts as they evolve over the next few days.”