Journey not yet over: Fiame tells candidates 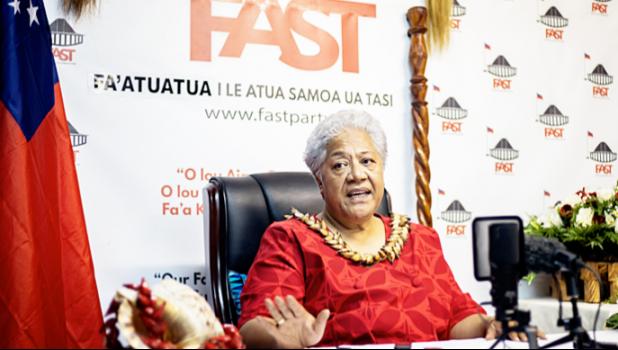 Apia, SAMOA — Fa'atuatua i le Atua Samoa ua Tasi (F.A.S.T.) leader Fiame Naomi Mataafa has told the party’s election candidates that the journey with the party is not yet over and they anticipate legal challenges to some of their victories.

Party committee members including candidates in the recently concluded general election gathered at the F.A.S.T. headquarters at Vaitele on Saturday night where she credited God for the party’s success.

In an address to the party faithful, which was livestreamed on the party’s official Facebook page, she said their journey that started in July last year has not ended.

“I believe that from the beginning of our journey in July 2020 till now we are walking together with the Lord and we will continue to walk with him because he is the only one we can guarantee our protection and blessings,” she said.

“Let us give thanks and praise for God’s endless love; as I sat and was deep in thought, a family bond is what crossed my mind.

According to the former Deputy Prime Minister, she is of the view that the party has worked together as a family, and then congratulated those candidates who recorded victories following the conclusion of the preliminary count.

According to Office of Electoral Commission data, a total of 106 candidates ran under the Human Rights Protection Party banner, followed by the F.A.S.T. party with 50, Tautua Samoa 14, five from the Samoa First Political Party and one from the Sovereign Independent Samoa.

While a total of 15 independent candidates ran in this year’s general election with preliminary results from the O.E.C. showing that the both the H.R.P.P. and the F.A.S.T. party are tied with 25 seats each out of the 51-seat Parliament.