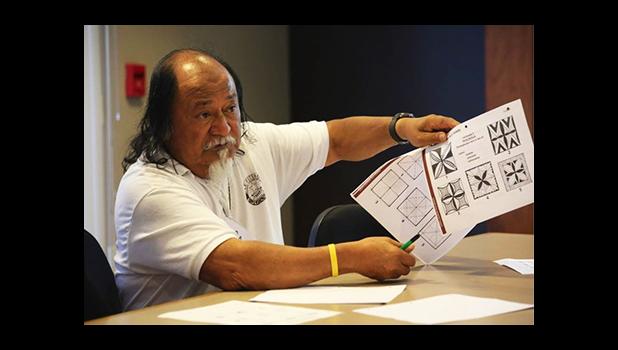 “The symposium was a wonderful way to bring like-minded people together to discuss the maintenance and growth of Samoan language and culture,” said Elisapeta Tuʻupo-Alaimaleata, Le Fetuao Samoan Language Center Executive Director and Founder.  “Educators working in language programs from across the Pacific and U.S. presented methodologies that when infused with culture can lead to successful models of language and academic growth.”

Presentations on Friday followed the theme Teaching Language Through Culture, Art, and Technology. Led by teachers of Le Fetuao and leaders of community schools, the presenters showed how they conduct instruction via a variety of mediums.

Gwen To‘omalātai presented on improving the literacy of students by incorporating visual aids of Samoan traditional arts and crafts.

In addition to being a source for information rich presentations, the symposium was an audio and visual treat.

During breaks and lunch, Miriama Samuelu of the famous Anivas band played alongside Ken Sataraka Aiono of Taupou Productions. Their performances delighted symposium goers who frequently showed their joyful appreciation of old Samoan music and for the faʻafiafiaga (entertainment) by singing along and jumping up in spontaneous siva (dance).

Putting together the beautiful Mataisau Art Exhibit that surrounded them and the meeting venue was a family effort by the Ueligitones. The exhibit showcased a progression of art pieces from Le Fetuao student work to the work of Mataisau (master artists): Margaret Ueligitone Hall, Brandon Avegalio, Albert Ueligitone, Tanya Masaniai Ibara, and Le Fetuao Art Teacher Sau Ueligitone.

In her plenary presentations Okenaisa Fauolo, shared some of the language maintenance work being done by the Samoan Studies Institute at the American Samoa Community College, which she directs. This includes compiling the legends of American Samoa and video stories on Rose Atoll also called Muliava. She also expressed the need for our students to be more familiar with the efforts of Samoan leaders such as Lauaki Namulauʻulu Mamoe, a renowned orator chief and one of the first leaders of the Mau, resistance movement in Samoa.

The second day of the symposium began with Keynote Speaker Tapaʻau Dr. Daniel Aga whose paper “Suʻesuʻega Lautele: Tulaga o le Gāgana Samoa i Amerika Samoa 2000 (with updates)” included research findings on the status of the Samoan language, as well as the threats to the continuation of Gāgana  Samoa.

On Saturday, community and church-based language programs were highlighted.

Leautulī Sauvao presented on the interactive techniques they use to engage and teach their preschool students at government funded Ᾱʻoga Amata, in New Zealand.

Le Fetuao provided symposium participants with a copy of its first Samoan Language Curriculum that compiles lessons developed by its staff.The development of the curriculum as well as the symposium was funded by grants from the Administration for Native Americans.

A congratulatory letter was received from Commissioner Lillian Sparks in Washington DC and other government leaders to congratulate Le Fetuao SLC and the Samoan community in general.

“Samoan churches and community organizations are welcome to request a copy of Le Fetuao’s Samoan language curriculum as a resource guide to help develop more Aʻoga Samoa in the U.S.,” said Fepuleaʻi Lāsei John Mayer Le Fetuao Principal Investigator and founder of the Samoan language program at the University of Hawaii at Mānoa.

The symposium culminated with an evening banquet where Le Fetuao’s siva class shared songs and dances based on the theme “Faʻalelegapepe”, a traditional showcase celebrating the completion of Samoan measina (treasures), such as siapo and fine mats.

The banquet also provided Le Fetuao an opportunity to acknowledge those who have contributed to their success during the 2015 to 2016 school year at the award’s presentation.

Feedback from the symposium’s attendance agreed that the 2016 Samoan Language Symposium was long overdue and an important component to the maintenance of our culture and language. Everyone rejoiced in the opportunities and knowledge that they gained during this two-day event that marked the starting point of a new chapter in efforts to revitalize Samoan language and culture across the globe.

In a "Forge Ahead" session Le Fetuao generated an international Samoan committee consisting of volunteers from different locations that will take up the task to develop the first Samoan Children's Dictionary. The goal is to continue the work by presenting an update at next year's Gagana Samoa symposium. Those interested in contributing to this effort may contact Le Fetuao at admin@lefetuao.com. Look for updates on the 2017 Fono o le Gāgana Samoa to be uploaded to www.lefetuao.com, as well as Gagana Samoa presentations, curriculum resource materials, power points and abstracts.