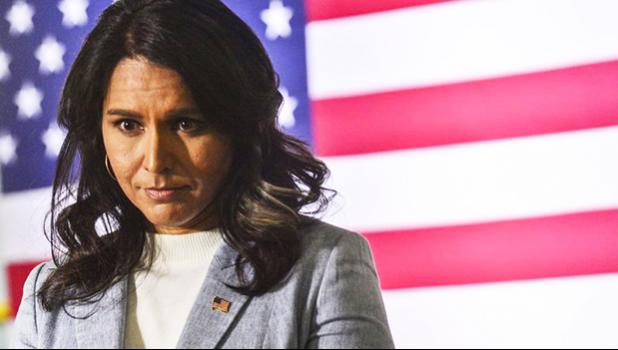 Source: Honolulu Civil Beat
The Hawaii congresswoman has long maintained a support base made up of people from all over the ideological spectrum.

Honolulu, HAWAII — What do an American Kremlin sympathizer, a doctor with ties to Hindu nationalists and George Clooney’s neighbor have in common?

They’re all bankrolling U.S. Rep. Tulsi Gabbard’s attempt to pay down her legal debt from an ill-fated lawsuit against Hillary Clinton.

Gabbard, who decided against another term representing Hawaii in Congress in favor of a long shot presidential run, created a legal expense trust fund in May, according to paperwork filed with the House of Representatives. Gabbard dropped out of the presidential race in March, but not before racking up tens of thousands of dollars in legal bills connected to the $50 million lawsuit she filed against Clinton in January, according to Federal Election Commission records.

Legislators can create these kinds of funds to pay for litigation, as long as it’s related to their duties in Congress or on the campaign trail.

The legal fund gives donors who’ve already reached their FEC maximum to a candidate another way to give money. It also allows Gabbard to fundraise even though she’s not running for office and frees her up to spend the remaining roughly $165,000 left in her presidential campaign account on other things.

The fund will help her pay bills related to the suit “against Hillary Clinton for defamation over her statements relating to Tulsi Gabbard and her campaign on the podcast Campaign HQ with David Plouffe, and other legal expenses that have arisen or may arise” around that issue, according to the paperwork, dated May 5. The fund paperwork doesn’t mention another suit Gabbard filed against Google, which has since been thrown out.

Gabbard’s suit against Clinton alleged that the 2016 Democratic presidential nominee defamed the Hawaii congresswoman by implying during the October podcast appearance that Gabbard was being groomed by the Kremlin to run as a third-party candidate. Gabbard dropped the lawsuit in May, but made clear she still thinks it has merit. Gabbard’s spokeswoman did not respond to a request for comment.

As of the end of July, Gabbard had raised a total of $23,502 for the legal fund from eight donors, according to a quarterly report filed in the Capitol. Donors include some of Gabbard’s most ardent, and most controversial, supporters, including a few who appear to have their own axe to grind against Clinton or their own reasons to defend Russia.

AN UNUSUAL USE OF AN EPENSE FUND

Government ethics experts said the use of a legal expense fund to finance this kind of litigation is very unusual, even if Gabbard is within the bounds of congressional ethics rules. Members of Congress usually use these funds to defend themselves against lawsuits from others, or to pay for a defense in campaign finance or congressional ethics cases.

“A defamation lawsuit, that type of offensive use of a trust, is unusual,” said Bryson Morgan, a former investigator at the Office of Congressional Ethics. “I don’t think I’d go so far as saying unprecedented, but I think it’s unusual, certainly not common. But it does fit within the scope of the permissible use of the trust.”

Brett Kappel, a Washington, D.C.-based campaign finance lawyer, agreed that the use of the fund for the Clinton lawsuit is permissible. House ethics rules allow a fund to pay legal fees arising out of a member’s status as a candidate or elected official and even a civil matter bearing on an individual’s reputation or fitness for office, he said.

“Obviously, a defamation lawsuit would be a civil matter to protect an individual’s reputation,” Kappel said. “That said, this is a unique situation. I do not recall another case in which a Member created a legal expense fund in order to pay legal fees to initiate litigation.”