The new Aussie, UK, US pact, born in secrecy, will have huge implications for Australia and the region 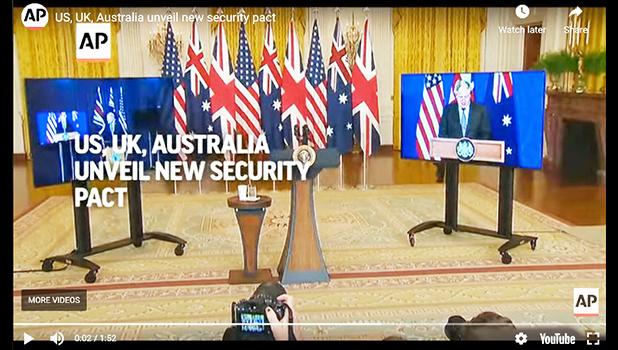 By
Patricia A. O’Brian for The Conversation

Canberra, AUSTRALIA — It has been announced the US, Australia and the UK are forming a new security partnership to be known as AUKUS.

This alliance, announced by the leaders of the three countries, throws an entirely different light on the recent 70th anniversary of the ANZUS Treaty and indeed key defence relationships of the past seven decades.

Dubbed by some as ANZUS 2.0, AUKUS is a trilateral agreement, but one that notably excludes New Zealand. With the UK’s inclusion instead, this agreement shifts the ANZUS Treaty’s Pacific Ocean focus to one that encompasses the Indo-Pacific and Atlantic Oceans too. It is an arrangement with global reach and profound, long-term implications.

There is much to unpack from this far-reaching announcement. It was only known publicly that a major announcement was coming less than 24 hours beforehand. In the slick promotional video that preceded remarks by Australian Prime Minister Scott Morrison, UK Prime Minister Boris Johnson and finally US President Joe Biden, the fact that the three nations are democracies was touted as a defining and unifying feature.

Yet the publics of the three nations were kept in the dark about what was afoot, and were instead presented a fait d’accompli. “AUKUS is born”, Morrison declared. Few knew it was even in gestation.

The secrecy surrounding AUKUS is troubling given its significance, especially for Australia. These stakes were clearly demarcated in the White House press briefing ahead of the formal leaders’ announcement. AUKUS in its scope and aims: binds decisively Australia to the United States and Great Britain for generations.

To further underscore the significance for Australia, the US spokesperson described AUKUS as: the biggest strategic step Australia has taken in generations.

The most significant component of AUKUS announced so far is that Australia will acquire nuclear-powered submarines. The US and the UK have shared this nuclear technology in an arrangement dating back to 1958.

Over the next 18 months, the US and UK will “support Australia’s desire to acquire nuclear-powered submarines”. Adelaide will soon see technical and strategic teams from all three countries working on building the subs.

These submarines will allow Australia to “deploy for longer periods”, are “quieter”, “much more capable” and will allow “us to sustain and to improve deterrence across the Indo-Pacific”, the White House said. All three leaders were at pains to stress Australia has no intention of pursuing nuclear weapons, though these capabilities will necessarily develop along with the limited AUKUS aims of propulsion.

Now Australia’s pre-existing sub-building deal with France is destined for the scrap heap, but not without a hefty bill for Australian taxpayers, it has been reported.

The other elements of AUKUS include enhancing joint capabilities, deeper military interoperability, “new architectures” of meetings and engagements between defence and foreign policy officials, and to “spur co-operation across many new and emerging arenas” – cyber, applied AI, quantum technologies and “some undersea capabilities”.

The need for this immense shift in Australia’s defence capabilities and the genesis of the AUKUS partnership were not specified in today’s announcement. Biden came closest to articulating AUKUS’s intent when he said it will help “better meet the threats of today and tomorrow”. There is no doubt what has sparked this strategic recalibration: the rise of China.

In addition to exponentially increasing Australia’s military capabilities, the overarching rationale of AUKUS is to link existing allies and partners together. This will in turn create a global web of security arrangements to combat China’s massive and rapid global expansion. This is why the focus of AUKUS is on the Indo-Pacific, which stretches from the eastern Pacific to the east coast of Africa.

Many questions remain about AUKUS. One is why did the UK return to the Indo-Pacific arena in this way, having essentially left it, in strategic terms, in the 1950s?

According to Johnson’s brief remarks, it joined to impart knowledge about nuclear submarine technology, “acquired over generations”, to Australia. This will have a two-fold benefit, he said. It will “preserve security and stability in the Indo-Pacific” while “creating hundreds of highly skilled jobs across the United Kingdom”. The UK’s involvement in AUKUS is its most significant enaction of its new Indo-Pacific strategic “tilt” set out in its 2021 defence and foreign policy review.

And where does AUKUS leave New Zealand? Prime Minister Jacinda Ardern reassured New Zealanders today that she “welcomed” greater UK and US involvement in the Indo-Pacific region, a security outlook she has clearly adhered her nation to.

But beneath statements insisting that AUKUS does not interfere with New Zealand’s existing security arrangements, its exclusion from this security partnership has set it on a singular course.

There is no doubt China will react strongly to this news and, given its recent conduct towards Australia, punitively in terms of trade. The implications are likely to be manifold.

How Australians respond to the nation’s course set without their knowledge or consultation will be interesting to gauge. If 70 years of living with the ANZUS treaty is any indication, reactions will be strong and sharply divided.

Patricia A. O’Brian is a visiting Fellow, Department of Pacific Affairs, Australian National University, and Adjunct Professor, Asian Studies Program, Georgetown University. Her essay is republished from The Conversation under a Creative Commons license.