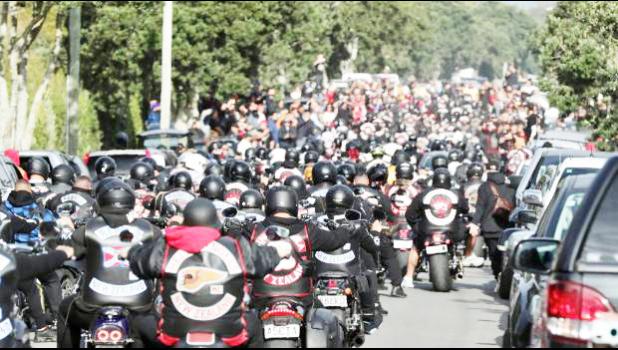 Auckland, NEW ZEALAND — Police have made no arrests after a day of massive gang funeral processions across Auckland to farewell a Head Hunter who died in custody.

Roads were closed to protect the public on Friday as hundreds of members of numerous gangs descended for the funeral in Auckland for Taranaki Fuimaono.

The day began with Head Hunters arriving en masse on their motorbikes at St Joseph’s Catholic Church in Grey Lynn, near the central city.

They were joined by hundreds of mourners from other patched gangs including the Rebels, Sons of Samoa, King Cobras, Hells Angels, Killer Beez, Mongrel Mob and Two Eight Brotherhood, among others.

After the funeral, a huge motorcycle procession again followed the hearse out to Avondale then back across town to the Head Hunters East pad, Stuff understands, before heading south to the Māngere Lawn Cemetery for the burial.

Fuimaono, 43, was facing drugs charges when he was arrested.

He died in police custody overnight on Saturday in Auckland.

Read more plus photos and videos at Stuff New Zealand