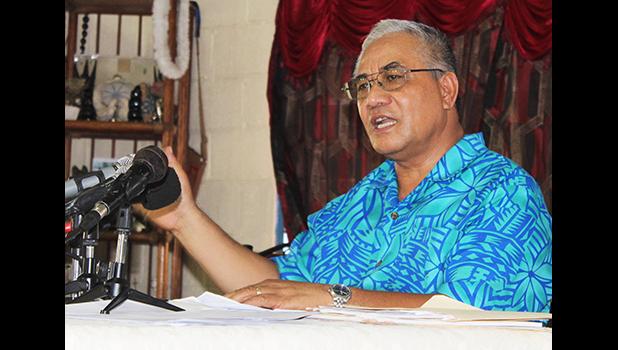 Apia, SAMOA — Former Reverend Opapo Soana’i Oeti has set the record straight dismissing rumors circulating that funds used for their trip to Rome were from the government of Samoa.  However, he explained that $10,000 was a gift from the Prime Minister Tuilaepa Sailele Malielegaoi and his family, and it’s not taxpayers’ money.

This was made known in an open letter signed by Opapo, who is the father of the stigmata girl, Toaipuapuaga ‘Toa’ Patrick who claims to be carrying the marks of Jesus when he was crucified. Toa who was a Congregational Christian Church of Samoa (CCCS) member has since converted to Catholic, and she is currently in Rome with her family. They are due to return home next month.

The trip to Rome, which Opapo is referring to, came following a call from the Vatican for Toa to come to Rome so the Catholic Church could investigate her well being and state of mind. Her son, husband and her father, Opapo, escorted Toa who was pregnant at the time.

Since then — as reported last week — Opapo has since been stripped of his pastoral title within the CCCS, a decision by the CCCS Elders Committee.

In a letter obtained by Samoa News, Opapo explained how their trip to Rome was funded. He pointed out aside from the $10K from the PM, there was other financial assistance from local companies, NGOs, their families and the CCCS in Si’ufaga Falelatai, the church for which he once was a pastor.

Opapo also made it clear that their family did not “borrow” money from the CCCS. “Our family is not like that, we don’t want to borrow money from the church — that is wrong and those funds are the sweat and hard work of church members.”

He said if the media seeks to reaffirm what he is saying then ask the Prime Minister directly, he knows who donated money for the cause. He said their family until this day is trying to pay off $10K to the travel agency for their return airfares.

According to Opapo, the fare had already been paid off, however due to the delay of Toa and her family returning to Samoa the return tickets have expired and his family and church are tasked with paying for these airfares.

Another rumor he wished to touch on was the birth of his granddaughter in Rome as if that was the purpose of the trip.

Opapo explained that one of the messages from God through Toa was that they leave for Rome on an exact date and that she’s to give birth in Rome.

“Go to Rome and wait to respond to the Vatican, leave on the month I gave specifically to allow another to a given womb,” this is the message from God, according to Opapo. He further explained that the birth of his granddaughter in Rome is a reminder of the Stigmata’s first appearance in the South Pacific, as it’s never happened before.