One dead as Fiji prepares for cyclone 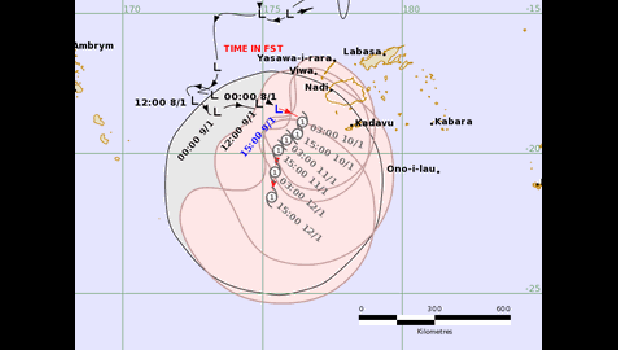 Nadi, FIJI — A man has drowned in Fiji while attempting to cross a flooded river as bad weather associated with a tropical depression continues to slam parts of Fiji.

The National Disaster Management Office (NDMO) said the 35 year-old man from the western town of Tavua was swept away while trying to cross a flooded river.

The office and the Meteorological Service expects thousands more who live in Fiji's main island Viti Levu could be in danger as major waterways record increasing water levels, and river banks burst.

Fiji Meteorological Services Director, Terry Atalifo said tropical depression (TD03F) which is slow moving to the west of Fiji should become a cyclone later this morning, warning that the weather system would bring excessive rainfalls.

"Since it's going to remain to the west of us the convergence zone and the rain bands will continue to bring rain across the whole country in the next few days.

Therefore, we have a heavy rain warning for the whole of Fiji. We also have flash flood warning for all low lying areas or areas that are prone to flooding across the whole country," he said.

The Fiji Meteorological Service said more flooding continues to be of major concern to us.

It has issued gale warnings for popular tourist hotspots, the Yasawa and the Mamanuca group of islands.

The NDMO Director, Vasiti Soko, she has seen pictures circulating on social media of people disregarding advisories and continue to cross and swim in flooded waters.

And it saddens me to announce that we have recorded our first fatality of (TD03F).

"The statistics have shown that a majority of deaths recorded during natural disasters are drowning as a result of people crossing flooded rivers and streams," she said.

Ms Soko said the government's national emergency operations centre was in 24 hour operation adding its main focus was getting people out of harm's way.