Pasifika sharing their culture on TikTok, despite security fears 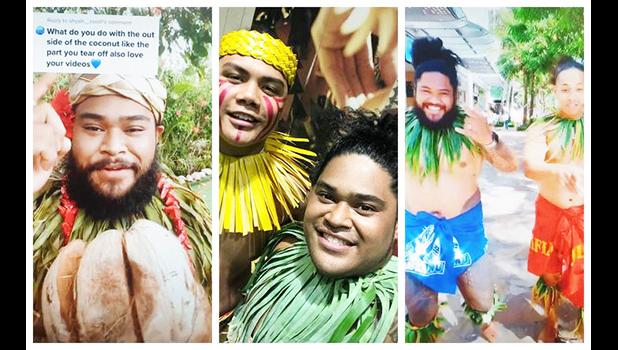 The 29-year-old has also filmed himself performing a fire knife dance called the siva afi, inspiring some of his followers to try out the Samoan custom for themselves.

Oloa, who lives in Hawaii, said his most popular posts on TikTok were the ones that taught people about the Samoan culture.

His posts feature one-minute tutorials on how to weave bracelets, make coconut milk and create a fire using natural materials.

Oloa is one of many Pacific Islanders using the social media platform to celebrate and broadcast their culture. His TikTok channel has attracted fans from all over the world, with subscribers from as far afield as Saudi Arabia, Europe and India.

He said people were "intrigued" by the Samoan way of life.

"This is actually how the people in Samoa live.

"For me, when you're a kid, you're working out in the sun, farming, making the fire, you know, making the coconut milk.

"It's a hard life in Samoa. But they make ends meet."

Despite the platform's growing popularity around the world, security on TikTok is coming under significant scrutiny.

TikTok is set to front an Australian parliamentary inquiry into foreign interference in the coming weeks over allegations it shares user data with the Chinese government.

Meanwhile, the Trump administration has already moved to force TikTok's owner, Bytedance, to either sell or spin off the US arm of its business.

Annette Garae is a pediatrician from Vanuatu who recently started posting TikTok videos for a bit of fun.

"I found it educational as well, learning stuff on TikTok and just learning how to use the camera," she said.

But when the category five Cyclone Harold struck Vanuatu at the start of this year, Dr Garae found another use for TikTok.

"The nurses were just flat out after the cyclone, and then preparing the hospital for Covid as well," Dr Garae said.

So as a celebration of Nurses Day, she decided to bring them together to learn and film a TikTok dance.

"Everyone laughed about it, and had so much fun. It was nice to see the nurses smiling and having a bit of fun, despite all the stress and challenges… every day with work," she said.

She has used the platform to teach parents in Vanuatu how to discuss difficult health topics like vaccination and injections with their children.

Some of her young patients even call her the "TikTok doc".

Dr Garae said TikTok also allowed her and other Pacific users to reconnect with their culture in a new way.

"Users from the Pacific showcase their culture and tradition through their dances," she said.

"You start thinking of your friends in the Pacific and then you realize, 'Hey, we're all in this together!' It's a nice feeling."

THERE IS VERY LITTLE TALK ABOUT DATA SECURITY

Experts believe many Pacific Islanders do not know the risks social media apps like TikTok can pose for their privacy. [photo: via RNZ]

But despite the fun Dr Garae has on TikTok, she said she was concerned about how the platform collects and stores user data.

She says more must be done to educate young Pacific Islanders about the risks of sharing personal information online.

"The world is changing so fast, especially with technology, and especially in our Pacific countries where we're vulnerable to a lot of things."

She believes that although more people in the Pacific are using social media platforms, many of them do not know the risks social media apps like TikTok can pose for their privacy.

"I do not think people understand the risks associated with data security," Arnhambatt said.

"A lot of people see these apps as a form of entertainment, or as a way to kill spare time.

"There is very little talk about data security and people do not understand how personal data can be used."

Arnhambatt said social media platforms like TikTok were a very attractive way for people in Pacific nations to communicate online, as it allowed them to avoid otherwise expensive telecommunications charges.

"The cost of making a phone call here, for example, is quite expensive so, when you have the opportunity to communicate globally without having to use the local network it really helps, it saves people a lot."

But while more people in the region are sharing videos on TikTok, Arnhambatt believes the trend is unlikely to take off in the Pacific because interacting with strangers overseas is not a part of the culture.

"As a people, we love to communicate, we're always surrounded by family," she said.

"There is no need to go online and talk to a stranger. You have so many people at home to talk to anyway."