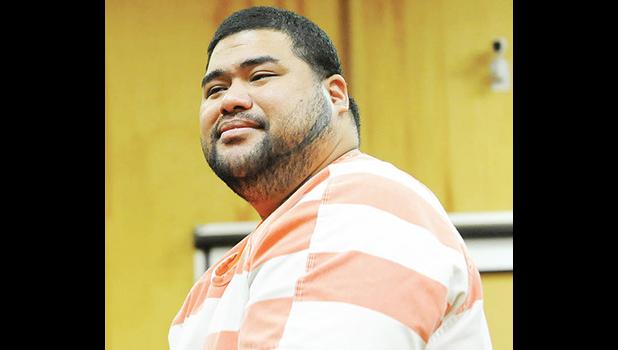 Kealakekua, HAWAII — A motion for a new trial in the case of three individuals found guilty in the September 2018 beating of a hotel security guard was denied Friday in Circuit Court.

Barry Sooalo, attorney for Wesley Samoa, argued the court should consider granting a new trial for his client and his two co-defendants Natisha Tautalatasi and Lama Lauvao.

Samoa and Tautalatasi were found guilty of attempted second-degree murder and Lauvao was found guilty of the lesser charge of first-degree assault following a June jury trial.

Sooalo argued Friday that a miscarriage of justice would result if the verdict in the trial were to stand.

Sooalo said the first issue was the right of his client to confront his accuser, which he was denied. He argued the burden was on the state to bring a motion to determine the unavailability of the complaining witness (Kanui), yet there was no hearing and no motion.

“The state did not compel Mr. Kanui to come,” said Sooalo.

He also called into question a video that was presented to the jury showing Kanui’s physical condition.

A video of Kanui at Craig Hospital in Denver was played for the jury while his daughter, Jennifer Farrell, was on the stand. It showed Kanui being hoisted by a lift in order to be placed in a wheelchair. He showed limited movement in his biceps but no ability to move his extremities.

Sooalo argued the video was testimonial hearsay and highly prejudicial.

Sentencing for the three is set for Sept. 13.