Road washed away at Moamoa 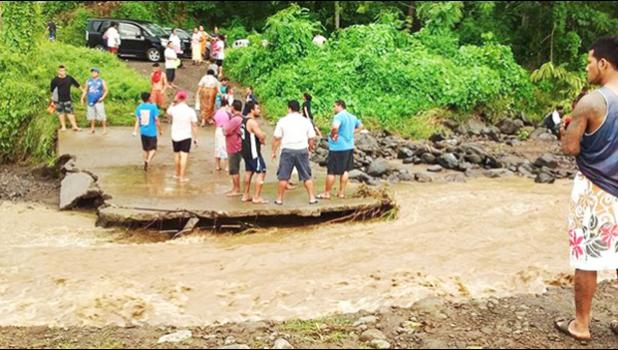 One of them, Tagaloa Ta’avale Masoe, said they desperately need help after the road there was washed away during Saturday’s flooding.

More than 70 families living in the area have been affected.

In the hot sun yesterday afternoon, close to 20 men and women were piling up rocks in an effort to erect a temporary access road to allow residents to cross the river.

“Our family has lived here for a long time and this is the first time we have experienced this unfortunate situation,” said Tagaloa.

“The river has even washed away part of the land.

There are about 300 people who use the road on a daily basis.

“I hope the Prime Minister will consider offering some assistance for us,” he told the Samoa Observer.

“The unfortunate situation has deprived us from our Sunday church activities and family gatherings as we cannot get to the other side.

“We have had to build a temporary walkway to commute over to other side otherwise, we would be stuck on this end.”

Tagaloa added that students need to get to school today.

Efforts by Police to reduce the drug problem in Samoa with the recent raid at the flea market have been applauded by several flea market vendors.

Last week, the Samoa Police Service carried out a drug raid at the Savalalo Flea market where about 100 Police officers were seen with their K9 dogs.

All the access roads leading into the Flea Market were closed off by the Police.

For fear of repercussions from the alleged drug dealers, the street vendors opted not to use their full names.

One vendor, who only wants to be identified as Vin, applauds the Police for heeding their call to clear the drug dealers from the market.

He has been in the business for 10 years now.

“We witness them all the time selling their illegal drugs to people of all ages, from high school students to the elderly population.”

“We had to do something about it and what other way than to report to the Police to take a hold of the situation,” he said.

Another vendor, an elderly mother, was ecstatic the alleged drug dealers were caught.

“Not all of them were taken but at least now they know we will not hesitate to report illegal activities to the Police when we see them again hanging out at the market.”

The airline is still awaiting approval from the Federal Aviation Administration to offer the trips across the Pacific Ocean.

Southwest says it plans to announce flight routes and service dates after they receive the clearances.

The driver of the taxi, who crashed into the street lights at the intersection in Taufusi, has been charged with careless driving.

A bystander told the Sunday Samoan that the taxi was speeding and just went straight for the street lights during the early hours of yesterday morning.

“I heard the brakes screeching and when he finally came to a stop after crashing into the street lights, he exited with what appeared to be a shotgun, but I was not certain."

“He then took off and I called the Police to report the matter."

Workers repaired the lights yesterday and they were worked into the night.

A telecommunications company in the Northern Marianas is threatening to cut the fibre optic cable that connects Tinian and Rota to Saipan if the government fails to provide $US1.3 million it promised to pay for the service.

Under a memorandum of agreement signed with the CNMI government in 2016, Docomo Pacific agreed to include Tinian and Rota in connecting their fibre optic cable 'ATISA' at a fee of $US650,000 per island.

Earlier this week, the House of Representative included the $US1.3 million commitment to the telco in the $US15 million appropriations bill that also gave $US7 million to the CNMI Judiciary to fix its mold and air-conditioning problems.

The legislation still needs to be passed by the senate and supported by the governor.