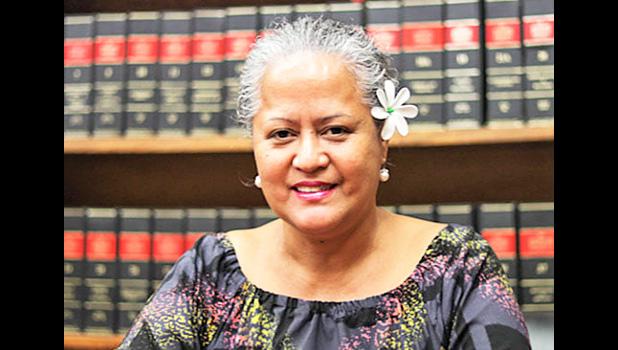 Apia, SAMOA — Samoa’s Attorney General Savalenoa Mareva Betham-Annandale is lashing back at the country’s media who reported that she “walked out” of Sunday’s special sitting of the court following an application by FAST lawyers challenging a late night proclamation by the Head of State issued by email from the Government Press Secretariat at 9.09pm Saturday night (Samoa time).

The following is the text of the Attorney General’s statement.

1. To set the record straight, this press release contextualises Media Reports that I walked out of a hearing of an application by FAST this morning.

2. Today, Sunday 23rd May 2021 at around 9am, Mr George Latu and a process server, turned up at my home, in an apparent attempt to serve an Application to the Court, on me. This attempt was apparently made on the instructions of the Court Registrar.

3. Out of courtesy to Mr Latu, a senior lawyer, my husband invited him to wait at the conference room of his office next door to my home, where I eventually met with Mr Latu.

4. I explained to Mr Latu that I was meeting him out of professional courtesy. He attempted to serve documents on me. I explained that I was refusing service and he said that he was acting on the instructions of the Court Registrar. I was not shown any such instructions and presumably, Mr Latu wanted to convey that message, because Rule 26 of the Civil Procedure (Supreme Court) Rules 1980 clearly prohibits service on a Sunday. Rule 26 reads;

5. Additionally, it seemed less than appropriate that I be summoned to a Court Hearing without knowledge of the substance of the matter.

6. Mr Latu reiterated to me that he was only acting on instructions to serve the matter on me, before apologising for disturbing me on a Sunday.

7. I advised Mr Latu that, as courtesy to the Court, I would attend Mulinu’u for an in- chambers meeting (i.e. a meeting in the Judge’s Chambers) to identify what the matter is. I had still not been served with any documents and Mr Latu and his process server were invited to leave.

8. I arrived at the Court House at around 11:30am and waited, with Mr Latu and Mrs Heather-Latu, inside the Registrar’s Office. I enquired with the Registrar as to whether we would proceed to an in-chambers meeting and she confirmed that that was so.

10.          I rose again to advise the Court I was not there to represent anyone as I had not been served and had no instructions.

11.          Again the Honourable Chief Justice stated that I was served on a Pickwick basis and that the application was essentially an ex parte, and whether I wished to respond or not, it did not matter. I rose again to object but was told to sit down.

12.          The Honourable Chief Justice then invited Mrs Heather-Latu to speak to her application. At that point, it was clear to me that this gathering had been convened for a hearing and whatever application Mrs Heather-Latu had filed was about to start. I then politely rose again to advise the Honourable Court that I would take my leave as I felt it was not appropriate.

13.          I then walked out of what I had been advised to be an in-chambers meeting. It was clear to me that it was actually a court hearing of an application of which I had not been duly served. Additionally, even if that attempt at service could be construed as service, it would have afforded little or no time for preparation, including taking instructions from the client, basic requirements for a fair hearing.

14.          It is my respectful view that the right to a fair hearing and the principles of natural justice have to be duly observed and adhered to for all parties involved in a matter.

15.          I will await the proper service of such matter at my Office at level 6 of TATTE Building, where I will then be in a position to read and understand what has been filed and sought, take instructions and be in a position to file an appropriate response.