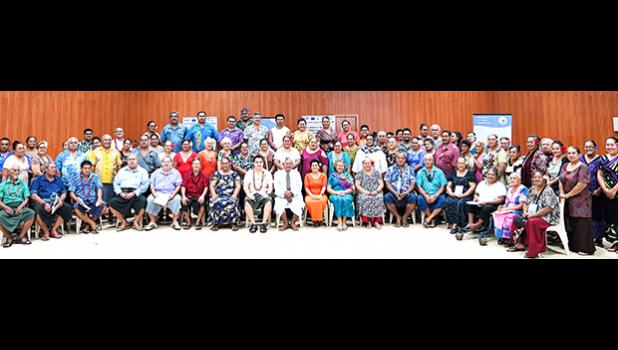 Apia, SAMOA — Community leaders from the villages covered under the Green Climate Fund Vaisigano Catchment Project (GCF-VCP) came out in full force this week to show their support of the project, at a consultation led by the Ministry of Finance via the GCF-VCP Project Management Unit, PMU.

Held at the Tooa Hall at Sogi, the meeting heard from village leaders about how thankful they are for this project, as well as questions they had about the project, particularly regarding the Call for Proposals that has now gone out as one of the key activities under this project.

The GCF-VCP is a 5-year project with funding of $65.7 million US dollars by the GCF and the Government of Samoa, supported by UNDP, which aims at strengthening target communities’ capacity to adapt, build resilience and reduce exposure to flooding brought about by the impacts of climate change.

An overview of the GCF-VCP outcomes, outputs and key activities being implemented was provided, as well as progress to date, to keep the communities well informed of where their support is needed to ensure the project is successfully implemented within the set timeframe.

“We strongly believe that as you are the key beneficiaries of this project, it is imperative to keep you updated of the project overall scope, planned activities and the progress to date. We value your involvement and contribution to this important project of our Government,” said Leasiosiofaasisina Oscar Malielegaoi, Chief Executive Officer, Ministry of Finance during his official address to the participants at the consultation today.

“We want you to take ownership of this project as it ultimately belongs to you and benefit your villages, communities and individual households within the Vaisigano River Catchment area.”

Because of the magnitude and scope of this project, various Government Ministries are involved in its implementation. They include the Ministry of Finance, Ministry of Natural Resources & Environment, Ministry of Works, Transport & Infrastructure, Land Transport Authority, Ministry of Health and the Ministry of Women, Community & Social Development, who are implementing different outputs and activities of the GCF-VCP.

The Ministry of Finance has taken a coordinated and integrated approach to ensure that the GCF-VCP meet the requirements of the funding agency, GCF, and successfully implement the project within the given timeframe of five years to 2023.

A similar consultation was held with these community leaders in August 2018.