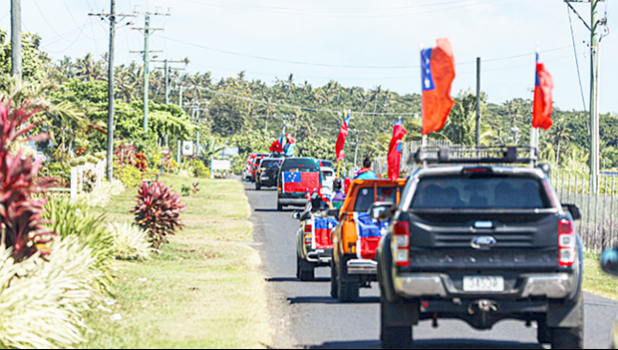 Apia, SAMOA — Samoa's court houses in Apia closed on Friday (Samoa time) in anticipation of a convoy of protest against the country's judiciary.

Our correspondent in Apia says hearings scheduled for the afternoon were moved to Monday to avoid any disruption.

The protests are in support of the former Human Rights Protection Party government which lost April's general election.

The HRPP leader Tuila'epa Sa'ilele Malielegaoi urged people to join him in demanding the resignation of the Chief Justice and other judges.

Over three months since the election, and after being prime minister for 22 years, Tuilaepa only conceded defeat in the past week after the culimination of legal cases related to the election result.

Last Friday Samoa's Court of Appeal ruled that the country had a new government after it judged an impromptu swearing-in by the Faʻatuatua i le Atua Samoa ua Tasi (FAST) party on 24 May was legitimate under the doctrine of necessity.

However Tuilaepa claims the judiciary favoured the FAST party in rulings which he says were in breach of the constitution and led to the HRPP's loss of government.

After previous calls for the Samoan Parliament to convene so a national budget can be passed, the ruling FAST Party now says there is no real need to rush to convene Parliament.

Prime Minister Fiame Naomi Mata'afa said last Saturday that Parliament would meet "in the first opportunity" this week to pass a budget.

The Ministry of Finance was instructed to prepare a budget using an article that allows 25% of the previous budget to operate until a full budget is prepared for Parliament to pass.

The Tuilaepa government had been using this provision since the 2020/2021 budget ended on 30 June which amounts to about 220 million tālā.

According to Fiame, wiith 25%, there is a figure, but there's a lack of supporting details even though the processes seemed to be followed for payments under the Emergency Budget.

She explained that the Ministry of Finance wanted Cabinet to use the budget they have prepared and announced by the caretaker prime minister last month.

"We still want our own Budget to deliver what the FAST Party has in place in its manifesto," said Fiamē.

Meanwhile, a FAST spokesperson says the legitimacy of the HRPP candidates who were not sworn-in within the required 45 days is still being determined as it has never happened before.