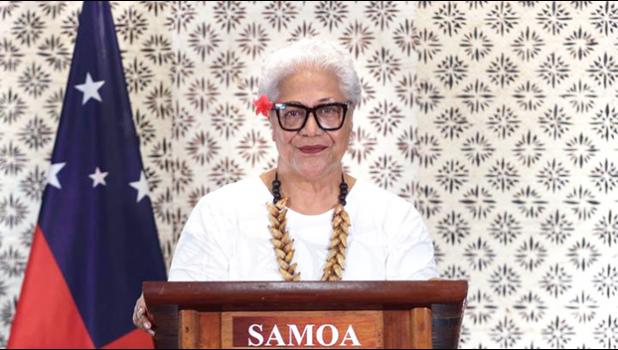 APIA, Samoa — Samoa Prime Minister Fiame Naomi Mataafa has declared a nation-wide lockdown starting today, Saturday, Jan. 22 in Apia (Friday in American Samoa) from 6p.m. until 6.p.m. on Monday, Jan. 24 (Sunday in American Samoa) — after 15 passengers who arrived earlier this week on a flight from Australia are tested COVID-19 positive.

Fiame announced the lockdown during a news conference today that was televised live in the country and streamed on the Samoa government Facebook Page — which was monitored by Samoa News for this story.

She said that 10 passengers on a flight from Australia on Wednesday this week tested COVID-19 positive and placed in managed quarantine. However, she said that this morning, government was informed of five more confirmed cases from the same flight — bringing the total number of positive cases to 15 and all are in quarantine.

“This is a significant number of cases for Samoa, giving the vigilance that we have managed, [with] health border security,” she said. “Despite all the 15-cases being in quarantine, Cabinet has decided to exercise and impose measures that will further enhance the security and protection of everyone from the virus and to ensure the risk of a likely community transmission is minimized to the extent possible.”

She also said that Cabinet has considered and approved the elevation of Samoa’s alert level to “Level Three — Red or High Risk”. She then declared the “nation-wide lockdown” which she says will require everyone to remain at home except for authorized essential workers, who will continue to provide crucial and necessary services to the country.

Additionally, only authorized vehicles will be allowed on the road during the lock down period. And all other activities — work, school, travel, restaurants, buses and churches — will be closed.

“Cabinet will carefully monitor developments during the lockdown and make necessary amendments depending on the situation at hand,” the Prime Minister said, noting that police will continue to maintain law and order.

“Under the current circumstances, the measures outlined are not intended to cause panic but simply encourage caution, vigilance and enhance awareness of an evolving situation,” she said and called on the nation for their cooperation.

In American Samoa, territorial officials are keeping in communication with their counterparts in Samoa. And Samoa News along with many residents of the territory monitored Fiame’s news conference online. Samoa News understands that the Governor’s Office is expected to issue soon an official statement regarding the situation in Samoa, but no other details were immediately available.

Will update this story online as new information becomes available.