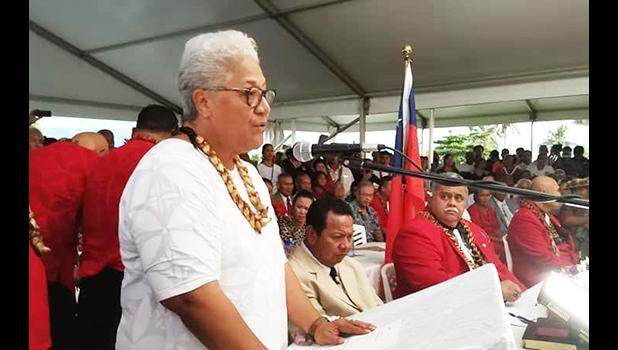 Apia, SAMOA — Samoa continues to wait for the outcome of court cases pertaining to the April election to be resolved after the Supreme Court on Monday met to determine the legality of the non-traditional swearing-in of Parliament held under a tent in the parking lot, after the caretaker PM ordered Parliament doors locked and the head of state refused to attend the ceremony.

After hearing testimony the court took the issue under advisement and is reserving its decision until Monday, June 28.

Both the Samoa Observer and Talanei News reported details of the hearing saying that New Zealand-based lawyer Benjamin Keith, representing FAST, said the Head of State’s refusal to attend the Legislative Assembly meeting was itself unlawful.

Keith argued the Head of State and the Clerk of the Legislative Assembly were both obliged to follow the decision of elected members to Parliament.  He said the constitution does not give the Head of State the option to decline such appointments and that he “does not have the power to stand in the way of the election results.”

Acting for the Attorney General Queen Counsel, Dr. Paul Rishworth, argued that the constitution gives the Head of State the exclusive right to swear-in the new Speaker of the House.  He said the Speaker was not sworn in on May 24, nor did the event take place inside the chamber of Parliament in Mulinuu. He submitted that if Parliament is to convene anywhere else aside from its chamber the Head of State has to issue a notice to that effect but this was not the case when FAST convened outside Parliament.

FAST argued that its ceremony was held in order to meet the constitutional requirement for Parliament to meet within 45 days after the election.

Justices Vui Clarence Nelson, Lesatele RapinVaai and Fepuleai Ameperosa Roma presided at the hearing and have reserved their decision until next Monday, June 28.