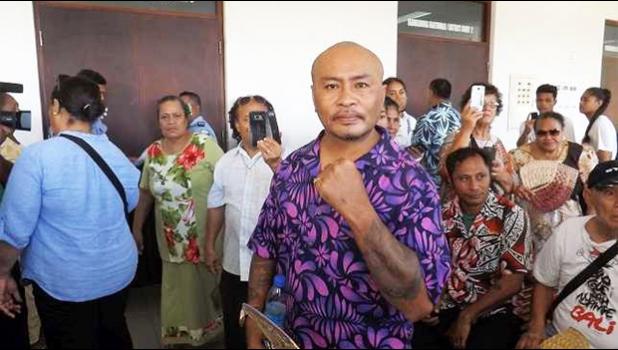 Apia, SAMOA — The man who threw a pig’s head at Prime Minister, Tuilaepa Dr. Sa'ilele Malielegaoi, and is now accused over a plot to kill the P.M., is facing an extradition hearing in Australia.

A spokesperson for the Attorney-General's office told the Brisbane Times that the defendant, Talalelei Pauga, 43, is wanted "to face prosecution in Samoa for the offence of conspiracy to murder".

Lawyer, Marc McKechnie, appearing on behalf of the Samoan Government, told a Brisbane Court on Tuesday that Samoa had made a lawful request to extradite Pauga and Australia has to honour its obligations under international law.

McKechnie said the charges against Pauga were serious.

They are trying to convince a Brisbane magistrate to release Pauga, arguing his detention was unlawful as Pauga had not been brought before a magistrate upon his arrest, according to the Brisbane Times.

The extensive hearing on Monday focused on administrative matters including Pauga's right to privacy, with an unsuccessful attempt made by his lawyers to close the court to the public and journalists.

A pig's head and rocks with threatening messages written on them were also thrown during the disturbance, TV1 Samoa reported at the time.

A business associate of Mr Pauga, who preferred not to be named, says the incident was a protest against alleged Samoan cultural land rights abuses.

He said Mr Pauga was a well-known Samoan activist and a member of Samoa Solidarity International.

"Throwing a pig's head in Samoa is a cultural insult to show disgust," he told AAP outside Brisbane's Magistrates Court on Monday.

Mr Pauga was also angry over alleged corruption, misuse of international aid funds and the erosion of freedom of speech in the tiny Pacific nation.