Samoa woman jailed for biting and chewing another woman’s ear 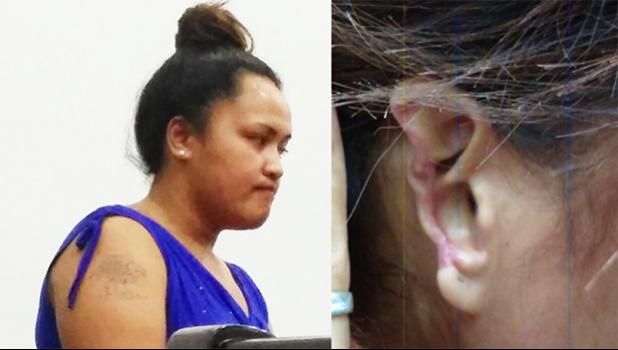 By
Samoa Observer
Apia, SAMOA — A woman, who bit off part of another woman’s ear, chewed it before swallowing the lobe, has been jailed for a year and six months.

The incident happened after a volleyball game went wrong where the defendant and another woman got into a fight. Taumasina was convicted of causing grievous bodily harm.

The prosecutor was Lupematasila Iliganoa Atoa, of the Attorney General’s Office.

According to the Police summary of facts, the incident occurred on 13 March 2018.

“Taumasina Falaniko is a 22-year-old female of Levi Saleimoa and Fagamalo. She is single and currently unemployed,” the summary reads.

“The victim is a 23-year-old female of Levi Saleimoa, she is single and also unemployed.

“Prior to the offending, the defendant had been long mad at the victim during their volleyball games because the victim usually struck the ball at her.”

The defendant then challenged the victim to a fight after their volleyball game.

“Whilst fighting, the defendant bit off the victim’s lobule chewed it and swallowed,” the Court was told.

“The defendant is charged with one count of causing grievous bodily harm injury with intent pursuant to section 1189 (1) of the Crimes Act 2013.

“This offense carries a maximum penalty of 10 years imprisonment.

“The defendant pleaded guilty to the charge against her.”

According to Justice Leiataualesa, a photo showing the victim’s ear, accepted by the defendant as true, shows a large part of the victim’s right ear missing.

“Other bruises and minor injuries were noted on her face and neck.

“In your pre-sentence report, you said that the victim had challenged you to a fight.

Today (yesterday), when questioned about the difference between what is stated in the Summary of Facts and your Pre-Sentence report, you confirmed that on the date of this incident, it was you who challenged the victim.

“You also admitted to the Probation Service that you chewed her ear and then swallowed it."