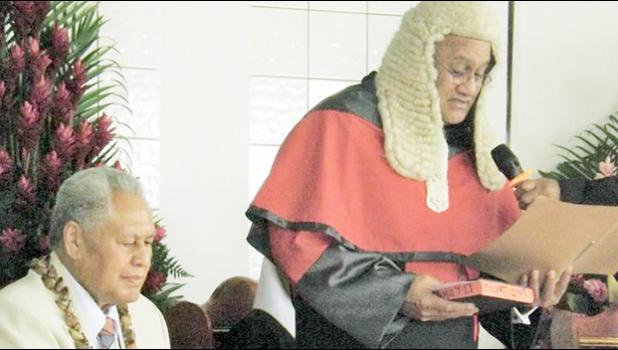 Apia, SAMOA — Chiefs from a prominent village on Samoa's big island have thrown their support behind the country's Chief Justice after the caretaker government questioned his competency.

Matai from Savaii's important maritime port village of Salelologa have urged the Human Rights Protection Party (HRPP) to refrain from their attacks on the judiciary.

Though originally from Samoa, the Chief Justice mostly grew up and was educated in Aotearoa New Zealand.

The JSC met on Monday to discuss the complaint but the outcome is as yet unknown.

The Samoa Observer reports that Salelologa's Tapa'au or High Chief, Taotua Ioane Matamua, said the village matai "have decided to speak up against the plans from the other side of the government" in support of Chief Justice Satiu.

The commission outcome should not be used to prevent Satiu from carryig out his duties according to Taotua.

Later this week Chief Justice Satiu is to preside over a Court of Appeal hearing which is likely to legitimise the election winning FAST party's ad hoc 24 May swearing-in as government.

The Salelologa matai have called on the HRPP to honour the new FAST party government.

FAST has 26 seats in the 51 member house with HRPP losing a number of its original 25 seats in the electoral petition process.

Meanwhile, a prominent Samoan journalist has condemned an attack on a young woman reporter earlier this week.

The reporter was verbally abused at a peaceful march attended by members and supporters of the HRPP, ironically calling for an end to violence against women.

Journalists Association of Western Samoa (JAWS) president Lagi Keresoma told the Samoa Observer the attack was "cowardly" and "uncalled for".

Any attack on any journalist, denounced Keresom, was an attack on democracy.

It's sad, she continued, that people who've claimed to be advocates for women and girls are the same people behind the attack.

A sibling union, the Samoa Alliance of Media Practitioners for Development has issued a statement saying the daily harassment of journalists across Samoa is politically driven.

The alliance is now in talks with the United Nations to see how it can better support women journalists.