Samoan man among those arrested in Portland, OR over the weekend 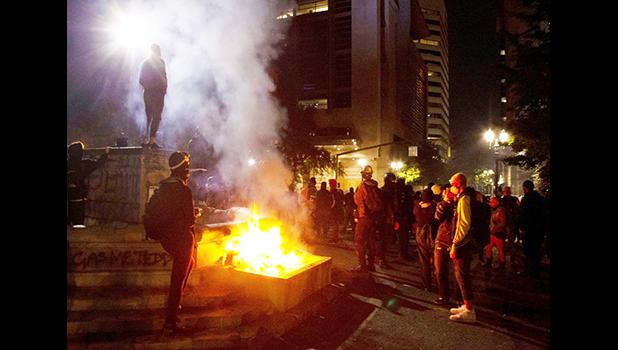 Portland, OREGON — A 24-year old Samoan, along with six other people, have been arrested and face federal charges for their roles in this past weekend’s riots at the Mark O. Hatfield U.S. Courthouse in Portland, Oregon.

Taimane Jame Te’o, 24, of Eugene, Oregon, is charged with assaulting a federal officer, using a “high intensity laser”, during the weekend riots of July 5 and 6th, according to federal prosecutors and court documents.

Te’o appeared Monday via video from a federal lock-up during a hearing at the federal court in Portland, and he entered a not guilty plea to a class A Misdemeanor count of assaulting a federal officer.

The defendant, who is released on his own recognizance with several conditions set by the court, is scheduled to go on trial Sept. 1st, according to court records.

An affidavit in support of the government’s criminal complaint and arrest warrant filed with the court by a Federal Protective Service (FPS) special agent, alleged that on July 6th, Teo assaulted federal law enforcement officers by directing a laser, a device that generates an intense beam of coherent monochromatic light (or other electromagnetic radiation) by stimulated emission of photons from excited atoms or molecules, towards officers during the performance of their duties on federal property, at the Mark O. Hatfield Federal Courthouse.

Two federal agents were able to apprehend Te’o, who was found with a green laser and taken to the detention center inside the Hatfield Federal Court Building where he told agents he would speak without an attorney present.

When asked why he had a laser, Te’o told the agents that he had always wanted one because he had seen them at The Oregon Fair, hadn’t tried it yet, and knows not to shine it in a person’s face. Te’o said he ordered the laser from Amazon but it was his friend — who is he calls “Elbow” —  who bought it for him.

Te’o said Elbow bought the lasers in bulk and sold him one for $20 in the park earlier in the evening. Te’o said he did internet research about what to bring to protests and a laser was an item recommended, the affidavit alleges.

When asked twice by agents as to what he intended to do with the laser, Te’o said he thought it would be able to make shapes, but when he tried it, it was just a straight beam.

“Te’o again stated he knows he shouldn’t shine it in people’s faces,” according to the affidavit, which also says that Te’o admitted to using the laser but would not say where he had shined it. Te’o told agents that he was shinning the laser at the trees.

The agents told Te’o that they would be interviewing other people who had been arrested and asked Te’o what he thought they would say about what he did with the laser. Te’o responded that others will say “I was shining it at trees”.

Te’o then asked to speak with an attorney before continuing questioning and the interview was concluded, the affidavit states.

Prosecutors say the complaint against the defendant is only an accusation of a crime and the person is presumed innocent unless and until proven guilty.