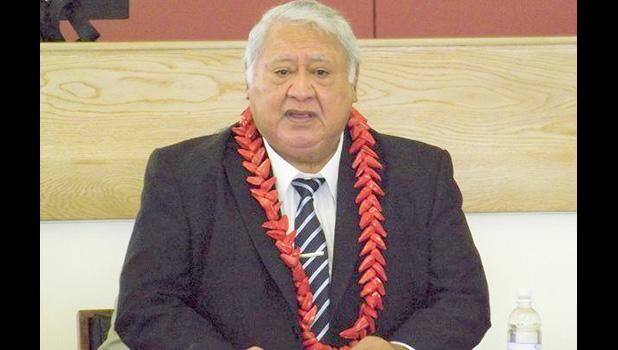 Apia, SAMOA — Samoa's Prime Minister has indicated that his government is willing to review the appointment process for Secretary General of the Pacific Islands Forum.

Tuila'epa Sa'ilele Malielegaoi's statement comes after five Micronesian presidents vowed to leave the forum after their candidate for the position failed to secure enough votes.

They were adament an informal agreement to rotate the position around the sub-regions was broken.

Tuila'epa says Samoa supports all efforts to maintain unity in the region and for all countries to consider where there may be lapses in the way the forum operates.

''In this regard, I am committed to the review of the 2002 appointment procedures for the Secretary General to ensure there is a robust process in place that ensures equitable opportunity for all to serve the region at the highest level,'' he says.

He says, however insurmountable problems may appear, there is always a way - the Pacific Way - to reach a solution.

He says that, as Pacific leaders, they have taken huge strides to present the region not as a collection of fragmented small islands, but as a united group of large ocean states.

Tuilaepa said the unavoidable reality is that the Forum leadership changes from time to time.

''I would therefore suggest that the Secretary General selection process in future should be unambiguous and clear.''

He suggests that since most in the region are members of the Organisation of African, Carribean and Pacific States, they should look at adopting the model of selection of the Secretary-General on the sub-regional rotation.

''What must be guaranteed is that each sub group must, when it is their turn, submit the best nomination. Let us focus on what binds us together, not on what divides us.''

Meanwhile, the government of the Federated States of Micronesia has confirmed it has formally triggered moves to leave the Pacific Islands Forum.