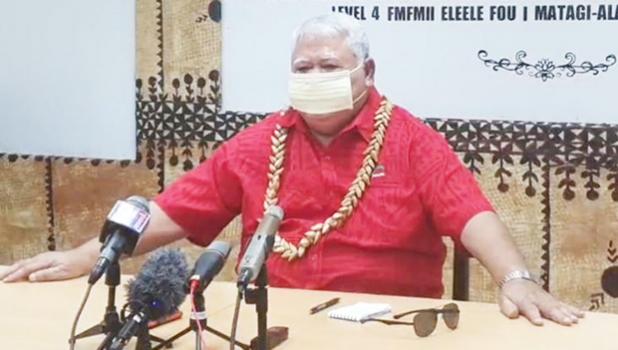 Apia, SAMOA — The Samoa Govt is planning to send to New Zealand this weekend on a cargo flight arriving Friday and returning the same day swab samples from the Samoa sailor, the first suspected COVID19 positive case in the country.

While awaiting the results from New Zealand, the sailor placed under strict isolation at the National Hospital since late Wednesday evening will be tested again this Saturday.

The two tests should confirm without a doubt whether the seafarer who returned last Friday from Italy where he had worked is the first official COVID19 case recorded in Samoa, Director General of Health Leausa Dr. Take Naseri told a press conference late Wednesday evening Samoa time.

Meanwhile, the third round of tests (nasopharyngeal nose swab) on the Samoan sailor who tested positive for COVID- 19 Wednesday night (Samoa time) came back with a negative result Thursday.

The latest test was conducted this morning Thursday, Nov. 19, 2020 at 6:00a.m prior to the announcement by Prime Minister Tuilaepa Dr. Sailele Malielegaoi at 8:30a.m, (two and a half hour later), during a local press meeting. (All dates and times are Samoa time.)

The sailor and 25 of his colleagues returning from Europe together with 274 Samoans arrived Friday, Nov. 13th on the 15th Repatriation Flight and were tested before leaving the airport for their respective 14-Day isolation locations. They all passed the initial tests.

All of the passengers were again tested yesterday, Nov. 18th, 2020 (4 days after arrival) per Samoa’s health repatriation protocol. And the sailor was the single test with a positive result.

He was immediately isolated to the Special Ward at the National Hospital together with his roommate from their shared quarantine accommodation since last Friday.

Although the roommate, also a sailor from Europe tested negative, health authorities have isolated the pair together as a precautionary measure.

Police have also been mobilized to the Hospital for security reasons and to ensure there is no breach or contact between the two sailors with unauthorized personnel.

Earlier this morning, the sailor was again tested at 6:00a.m Nov. 19, 2020 to reconfirm his previous positive result — but the result came out negative.

In announcing the test results, the Prime Minister assured the country that despite the negative test result relevant government officials remain vigilant with their preventative and anti-COVID- 19 pandemic response.

“It’s all systems go for the Government’s COVID preparedness and response plan.

“All the necessary health measures are enforced to eliminate any possible danger to our country,” said Tuilaepa. “The health protocols to ensure the safety of our frontline workers mostly public servants at the Airport Authority Friday are also activated to ensure that they are not in jeopardy in anyway.”

He called on the country to remain calm and he is confident that Government since March this year has been preparing to deal with incidents of this nature as a result of the pandemic.

“Let us continue to remain calm and not to lose our faith in our never ending divine blessings from our Father in Heaven. I remain firm that our Father will never forsake our country and our people,” said the Prime Minister.

Acknowledging the country’s power of prayers, the Prime Minister is also appealing to all Samoans to remain united in prayers for the Almighty’s continued divine blessings by protecting Samoa from the deadly virus.

Cabinet was to meet yesterday afternoon with the latest COVID- 19 development at the top of the agenda.

The Prime Minister will be hosting a Press Conference after the Cabinet meeting to announce the outcomes from the Special Meeting.

The Ministry of Health has clarified the 26 Samoan seafarers who arrived home Friday all tested negative before leaving Europe on their way to Samoa via transit in New Zealand, after reviewing their medical documents as mandated by the Travel Advisory.

And as a precaution, the 26 sailors were taken aside at the Faleolo International Airport for nasal swap tests at the Airport taking into consideration that they were stationed at locations ranked as COVID- 19 high-risk countries. And all the sailors and the rest of the passengers were cleared and transported to their allocated Quarantine Accommodations.

In the meantime, the two sailors under isolation are scheduled for further tests in the next 24 hours. And to date the pair have not shown any symptoms of the virus.