Screening of “Moana” in Samoa highlights role of Samoan culture 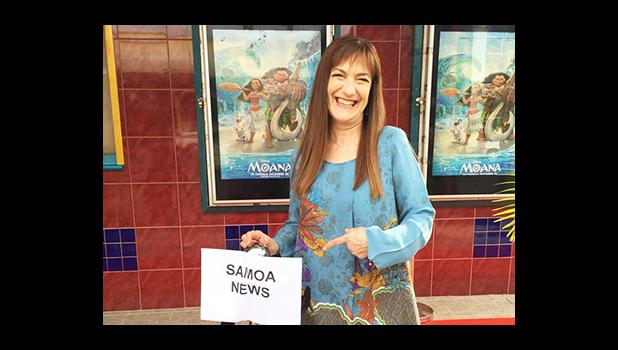 Apia, SAMOA — “Samoa is a very special place to us, for so many reasons... There’s a lot of the fa’asamoa that was borrowed for the movie,” says Ron Clements, who is one of the duo of directors for Disney’s blockbuster animated movie — “Moana”. John Musker, the other half of the duo-director team, producer Osnat Shurer and Auli'i Cravalho, the voice of Moana, arrived in Samoa this week for the private screening of Moana at the Apollo Cinemas Theater located in the heart of Samoa.

Prior to the showing of the movie, the audience, which included his Highness Tui Atua Tupua Tamasese Efi, viewed a recorded message from Seiuli Dwayne “The Rock” Johnson, who was in New York, unable to attend the trip to Samoa.

“Very very exciting right now, Talofa to everybody, we’re so proud to bring to you the screening of Moana, I wish I could be there but as you can see I’m in New York City, I'm promoting right now and again I wish I could be there to watch the movie with you. I’ve watched the movie with my family and we loved it and are so proud of it, and so proud that you’ll be watching it as well. The feedback we’ve been getting is the entire world and Samoa and all of the Polynesian Islands are so proud of the movie. This movie showcases the Polynesian culture to the world in this magnitude and epic and amazing story telling and amazing characters, was the number of reasons I signed up to do the character of Maui (Demi God) and again I am proud of this movie. And as we say, it’s in our blood and culture... chooooo hooooo.”

Shurer told Samoa News that the Moana story started in the Pacific islands 2,000 years ago and one of their stops in the making of the Moana film five years ago was Samoa.

“There’s nowhere like Samoa where the culture is so alive, and when we were here five years ago, we were welcomed with so much love and we learned so much here so many Samoans stayed with us in conversation from Samoa for the making of the film.

“We felt like we wanted to come back and celebrate watching the movie with everyone here,” she said.

There are so many questions asked as to where Moana is from in the Pacific islands, whether it’s New Zealand, Fiji, Tonga or Tahiti. Shurer explained, “We created a fictitious island called ‘Motunui’, but if you were to figure where it is in the world it would be probably near, Samoa, Fiji, Tonga, because our story was inspired about what happened, 3,000 years ago, when the voyagers were sweeping across the Pacific and we thought wow, what a great mystery but nobody really knows why.

“We visited Samoa, then to Savai’i at the blowholes and there was so much of what we learned here where the culture is so alive and effective. There are five consultants from Samoa who stayed in touch with us throughout the making of the film, Dionne Fonoti, Su’a Suluape Master Tattoo artist, all these wonderful people from here and we are back to see everyone,” Shurer said.

According to Shurer, since the launching, they have been very busy but nonetheless they had to come back to Samoa to share the movie with the people who helped in the making of the Moana film.

The voice of Moana, 16-year-old Auli’i of Hawai’i said she’s excited to be in Samoa as well, given how the importance of this movie is to the Samoan people.

“I’ve known how important it is to come to Samoa, for the first time and I love Samoa, the rich culture and the people are just so wonderful. I love how the film has a huge influence on everyone and it’s really nice to meet the people who assisted in the making of the film.” Auli’i told Samoa News that the highlight of her visit to Samoa aside from the beautiful people is eating ‘palusami’ (taro leaves baked in coconut milk) — as they don’t have it in Oahu.

Auli’i also has a message for the young girls: “You can fully take that title, I love the film, I love how its inspired by Polynesians, because I am a proud Polynesian and girls, you are Moana — Moana is beautiful and she’s a hero — you be that hero, you be that strong independent young Moana and remember you can go as far.”

Directors of the Moana film, Ron Clements and John Musker said this is their third visit to Samoa. Musker told Samoa News “when we first developed the idea of the film we went to Fiji, Samoa, Tahiti, but our time in Samoa was very important, we also visited Savai’i where the blowholes are.

“During our visit to Samoa, it was the first time we met people who were very inspiring and the way they explained to us their connection to nature and the culture was very special and there’s a lot in the movie that was borrowed from Samoa... the tuiga, taualuga, and the pe’a that the chief wears, it is such a rich culture we wanted to pay tribute to Samoa and we wanted to come back to view the movie with the many people who have been involved in the movie and so it’s really great that many of those people will be here tonight (Wednesday-Samoa Time) — people that we met who continue to assist us, Su’a Suluape, and Dionne Fonoti, who had a huge influence and were instrumental in helping and shaping of the film.”

Clement said they really wanted the movie to be something that involved Samoans and people from the Pacific.

“We also want to enjoy the movie with these people because it feels like it pays honor to the culture in return. Our trip to Samoa is very special to us, and there are many reasons why Samoa is a very special place to us, also Dwayne the Rock Johnson being Samoan and his ancestors.” Clement also thanked all of Samoa for welcoming them with open arms.

Animated film credits for the duo directors — Clement and Musker — include Disney’s block busters, “The Little Mermaid”, “Aladdin”, “Hercules” and “The Princess and the Frog”.  It is with no surprise then that “Moana” is a hit.