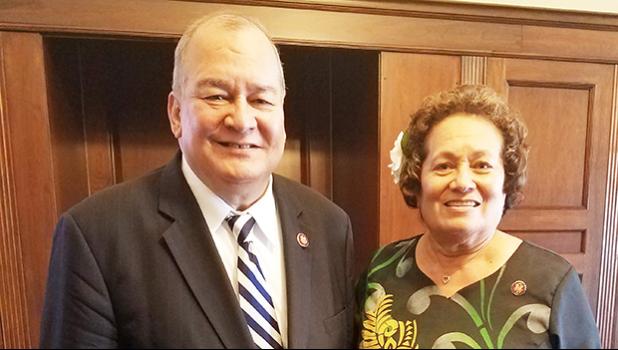 Washington, D.C. — Congresswoman Uifa’atali Amata is an original cosponsor of a House Resolution introduced this week that would designate a special “U.S. Territories Day” in the United States.

“I am incredibly honored and proud to be an original cosponsor of this House Resolution with my fellow colleagues and dear friends from across the territories,” said Amata. “We all understand the unfortunate reality that people from the territories, and the territories themselves, are often forgotten due to our geographic isolation from the continental United States. This will be a wonderful opportunity for enterprising teachers across America to learn more about us themselves and teach aspects of our beautiful culture to their students in an interesting way.”

“All of the territories are an integral part of the United States and have made so many sacrifices on its behalf. From the battlefields of World War II and Korea, to the jungles of Vietnam, the deserts of Iraq, and the mountains of Afghanistan – American Samoans and Service Members from other territories fought alongside their mainland brothers and sisters in defense of this great country. It fills my heart with pride that children across America could soon learn of their distinguished service and the beautiful places that they called home.”

“I would like to thank Representative Gregorio Kilili Camacho Sablan of the Northern Mariana Islands for authoring this House Resolution, as well as Reps. Jenniffer González-Colón of Puerto Rico, Stacey Plaskett of the US Virgin Islands, and Michael San Nicolas of Guam.”