Tongan tsunami felt around the Pacific 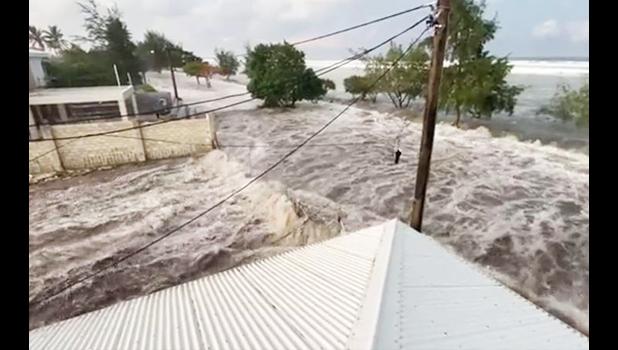 Suva, FIJI — Waves generated by a volcanic eruption in Tonga on Saturday have affected several Pacific island nations including New Zealand and Australia.

The series of volcanic eruptions were also heard in Samoa, Fiji, Vanuatu, and Cook Islands.

Multiple communities in Fiji experienced surges soon after the tsunami and warnings were generated following the eruption again of the Hunga-Tonga-Hunga Ha'apai seamount volcano.

Tonga remains the hardest hit with destruction of homes, vehicles and infrastructure.

Parts of New Zealand were under tsunami advisory after the violent eruption of the underwater volcano.

An advisory is in place for the north and east coast of the North Island and the Chatham Islands.

New Zealand's National Emergency Management Agency said people in those areas might experience strong and unusual currents and unpredictable surges at the shores.

People are being urged to stay away from the beaches and shorelines.

Local media reported a convoy of police and troops rushed the King to a villa at Mata Ki Eua as residents headed for higher ground.

As well as the palace grounds, the waterfront and main street were flooded in Nuku'alofa.

Rumbling and eruptions continued to be heard in Fiji early on Sunday. Residents reported rattling windows and houses shaking.

Villages in Lau, Kadavu, Vanua Levu and parts of the Rewa Delta on Viti Levu reported strong currents, high waves and surges, which inundated entire villages, while across the country many heard the sounds generated by the eruptions.

On the islands of Vatoa and Ono i Lau, which are closer to Tonga than mainland Fiji, villagers reported the presence of volcanic ash.

Fiji's acting Prime Minister Aiyaz Sayed-Khaiyum said a tsunami alert was in effect for the country as authorities warned people to avoid the shoreline and to move to higher ground.

Evacuation centres, some of which were still open from when Tropical Cyclone Cody had hit Fiji last week, were reopened to support those who needed to move to higher ground.

"We are also monitoring our air quality. As a matter of precaution, please cover all household water tanks and stay indoors in the event of rain due to the risk of rainfall becoming acidic," Sayed-Khaiyum said.

"Our schools were closed this past week, and they will remain closed until we are sure the impacts of the eruption in Tonga have cleared our waters as we may need to reactivate some of them as evacuation centres.

"But let us also be clear, we plan to reopen our schools for years eight to 13 once the weather situation clears up."

Sayed-Khaiyum said an all-of-government effort was underway which included the Mineral Resources Department, which housed Fiji's Seismology Unit, the National Disaster Management Office, and the Department of Environment, to analyse Fiji-specific risks from the Tongan seismic event.

"The country is currently looking at the air quality because there's some ash fallout. It's an ongoing situation and a very fluid situation, so to speak. The minister is talking to Wellington, to see whether there'll be any other aftershock effects.

"We are providing all the support and assistance from the different ministries that are working together to ensure that we first of all save lives. And to date, we know that nobody in Fiji has died from any of these inundation of waters."

The Fijian islands of Moce, Moala, Kadavu and Taveuni were hit by low-level tsunami which caused some flooding, the authorities said.

With the tsunami alert in force for Fiji, the government said it was monitoring the situation closely.