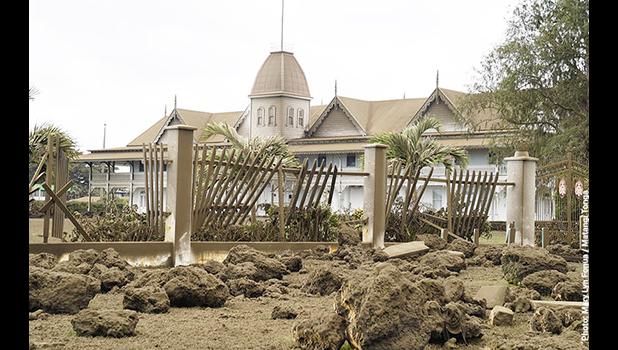 Nuku'alofa, TONGA — Tonga's King Tupou VI is urging his people to unify and rise from the ashes of the volcanic eruption and tsunami which devastated the country two weeks ago.

The King was evacuated to his residence inland at 'Eua, just moments after the Hunga Tonga-Hunga Ha'apai volcano erupted.

In a broadcast to the nation, the King said Tongans who can withstand difficulties are those that stand together.

He said homes, plantations and livestock were destroyed.

He said while the lives lost were few, the King expressed his condolences to the families of those who lost their lives "because it is a life".

"At the same time we face new challenges and the HMAF patrol boats are evacuating people on the outer islands devastated as the engines of small boats are affected from the small rocks from the volcanic eruption.

"Our communications depends on what we have during times of natural disasters. But the people that can withstand difficulties are those that stand together.

"It is not how much we have financially or the monetary assistance from overseas but it is the willpower of the people and our belief in God so that we show love, help one another and be compassionate.

"In the aftermath of this devastation, we must all stand and work for our country as it is our inheritance because it only you and I who will feel for our home," King Tupou said.

Financial support has already flowed in from the World Bank, ADB and other donor partners.

King Tupou also thanked the Government, churches, the private sector, businesses and other stakeholders for their joint efforts.

He commended the local radio stations in issuing warnings and "helping to save lives during this natural disaster."

Meanwhile, the Tongan Government has approved the deployment of 100 Fiji military personnel to help rebuild the Kingdom following the volcanic eruption and tsunami two weeks ago.

Tongan Prime Minister Siaosi Sovaleni said they are currently focussing on the humanitarian response effort before they allow foreign personnel on the ground to help with the rebuilding phase.

The first contingent of 50 Fijian engineers, medics and other specialists have been in Brisbane since January 21 to join Australia's Defence Forces heading to Tonga.

Fiji's military said the group tested negative to Covid-19 and had completed the required isolation period.

Army commander Major-General Jone Kalouniwai said the first contingent of 50 military personnel from Fiji is expected to be deployed to Tonga this weekend.

"Ten days was what we thought we could sustain on ourselves, the RFMF, and anything after that we would seek the assistance and support from the Australian Defence Force.

"But in this case, the Australians have been kind enough to offer us their full support and so it will be more than 10 days or whatever duration that the government of Tonga may feel, that would require troops on the ground to help and assist them in the tsunami relief support.

"It's good to see our soldiers working together with the Australian government. This shows the bond between the two countries.

"This also shows the camaraderie between Pacific Island nations. We did this in the Solomon Islands in the last few months, and we are grateful to do it again in Tonga," said Major-General Kalouniwai.

King Tupou VI's address to the nation was recorded over the telephone from 'Eua and broadcast on local radio last weekend. But it has only been translated into the English language and made available to RNZ Pacific this week.