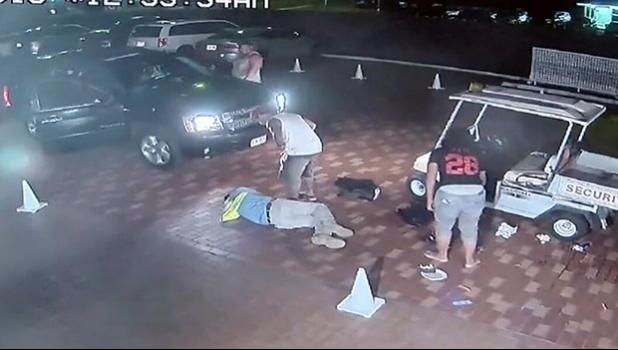 KEALAKEKUA, Hawaii — A defense attorney representing one of three individuals charged in the attempted murder of a hotel security guard placed the blame on the victim, calling him the aggressor and responsible for the brutal beating he endured.

The charge stems from an incident that occurred early Sept. 17, 2018, when Samoa, Tautalatasi, and Lauvao allegedly got into an altercation with the victim while in the parking lot at the hotel off Palani Road.

Hotel video surveillance of the incident shows Samoa, Tautalatasi and Lauvao along with a fourth person, later identified as Mahealani Kanehailua, chatting outside the hotel when the security guard pulls up in a golf cart. After what appeared to be an exchange of words, the video shows the three suspects pull the guard out of the cart and repeatedly kick and punch him in the head, back and stomach.

Following the assault, Kanui was airlifted to The Queen’s Medical Center on Oahu. He suffered a cervical spine fracture. The victim was later moved to a mainland hospital for further treatment.

Deputy Prosecuting Attorney Sheri Lawson opened by telling the jury that evidence will show that the three defendants acted with intent to kill Kanui. She portrayed Kanui as an active, fit, 62-year-old man who worked the night shift at the hotel and spent a lot of time on the ocean when he wasn’t working.

That night, an otherwise quiet, normal night, Kanui checked on a complaint of loud music coming from an SUV in the parking lot.

“He went to do his job,” Lawson said.

“They broke his neck, he is paralyzed. He cannot testify here, but you will see what happened to him. The video is evidence and other evidence will show an attempt to kill,” concluded Lawson.

Barry Sooalo, defense attorney for Samoa, addressed the jury next, portraying the three defendants as having had a peaceful goodbye as Samoa and Kanehailua were dropping Tautalatasi and Lauvao off at the hotel.

In Sooalo’s version of events, Kanui came up to the group and words were exchanged, but since there is no audio on the surveillance video it is unknown what was said. Sooalo then said that Kanui blocked their exit, and that he was the aggressor and caused all of the problems by preventing the group from leaving.

The defense attorney claimed that at some time during the confrontation Kanui struck Tautalatasi leading to the escalation of events. Again, Sooalo stressed that Kanui was the aggressor and responsible party, “preventing peaceful people from leaving,” and Samoa was just coming to the aid of Tautalatasi.

Sooalo then posed the possibility that the serious injuries Kanui suffered came when the hotel clerk arrived and after seeing Kanui on his back “shoved him forcefully on his side.”

He went on to say the EMTs handled Kanui roughly.