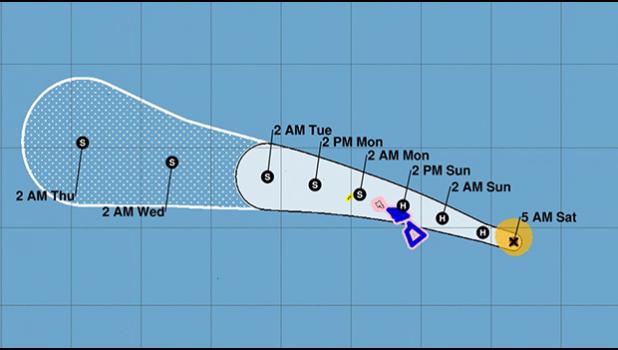 Honolulu, HAWAII — A tropical storm watch has been issued for Kauai County on Saturday morning as Hurricane Douglas continued to barrel towards the state, bringing the threat of strong winds, drenching rain and big surf to the islands this weekend.

A tropical storm warning was also issued late Friday for the Big Island and Maui County.

Meanwhile, Oahu, the Big Island and Maui County remain under a hurricane watch, which means hurricane conditions are possible within 36 to 48 hours.

At 5 a.m. Saturday, Douglas was a Category 2 hurricane located about 440 miles east of Hilo or 635 miles east-southeast of Honolulu and packing maximum sustained winds near 105 mph with higher gusts.

The hurricane is gradually weakening as it moves west-northwest near 18 mph.

On its current forecast track, the state will start feeling the impacts of Douglas late Saturday into Sunday. It’s expected to pass near or over parts of the state at hurricane strength or just below, bringing a “triple threat of hazards, including ... damaging winds, flooding rainfall, and dangerously high surf,” forecasters said.

Meteorologist Bob Ballard, of the Central Pacific Hurricane Center, stressed that small changes to the forecast track could make big difference. “Douglas is gonna be a big enough system that I think almost everybody’s gonna get some pretty serious weather from this,” Ballard said.