Tuila'epa needs to 'get a grip' Fiame says 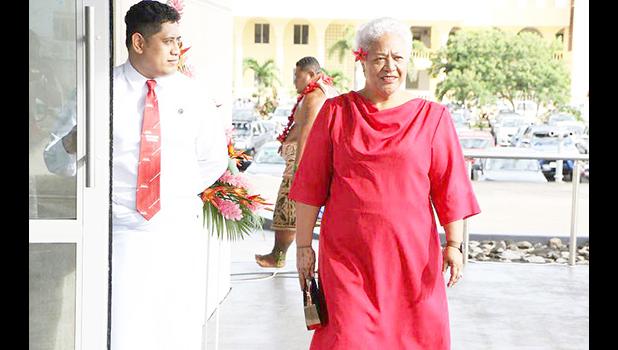 Apia, SAMOA — Samoa's Prime Minister-elect says she doesn't think the accusation of treason by the incumbent leader holds sway and suggested he his having a hard time letting go of power.

Samoa's Attorney-General filed a complaint with the Supreme Court, claiming Monday's swearing in of the FAST party was unconstitutional.

The Supreme Court heard it for mention this afternoon, and set down a hearing for Thursday at noon.

The attorney-general named the FAST party leader, incoming prime minister Fiame Naomi Mata'afa, all of its MPs and their lawyers as respondents.

In a statement last night threatening action, the attorney-general's office said those who conducted the ad-hoc swearing in ceremony held Monday afternoon had no legal authority.

But Tuesday, FAST was maintaining that it is now the government — it has a majority, and was forced to act by the head of state and parliamentary officials' defying the Supreme Court.

Incumbent Prime Minister Tuila'epa Sailele Malielegaoi was not backing down either, again calling the FAST party's actions a coup.

Fiame spoke to RNZ Pacific's Don Wiseman on Tuesday evening and said she did not think the accusation of treason, made by Tuila'epa yesterday, is a serious one.

"You might have recalled at the last parliament he was throwing those threats at the four of us. We were the sole opposition in the House.

"Treason, it's very well defined. It has a lot to do with killing people or plotting to kill people, having full frontal physical attacks. It's nothing like that.

"So I think he just likes to stoke the fire and throw in big words like treason. I don't think that [his accusation] is very serious.

Tuila'epa suggested the judiciary had a bias towards Fiame, partly due to a family relation. Fiame said he "needs to get a grip."

"It's not a matter of bias. It's a matter of the merit of the issues and the cases brought before the court."

She suggested Tuila'epa was either getting bad legal advice or having lawyers tell him what he wanted to hear.

"Unfortunately the lawyers are people in their official capacities, they're not private lawyers for the HRPP.

"They're sort of running the show for him. In fact if there's anything more concerning for me, it's that these public officials are not able to play their role and function in an independent and impartial way. They're just toeing the line."

Fiame said Tuila'epa was getting to the end of a long career and suggested he was having trouble letting go.

"The thing that really happened, first and foremost, is that he was getting to that point in that long and distinguished career where he thought he was, you know, omnipotent and could now do whatever he liked. Now, he's gone from being 'chosen by God' to setting himself up as very god-like.

"The second thing, I think, was that before the election he was making predictions of having another landslide victory. So when the results came out I think that was quite a dire shock for him."

On where the situation with the parliament is now, Fiame pointed out HRPP MPs also faced a conundrum:

"So I would imagine that if things return to normality, whether there is a formal recognition of that process, and just transferred into the records of parliament, or whether we have another... because of course the other issue is what happens to the other 25 HRPP MPs? Are they in fact invalid or now voided by the fact that they weren't sworn in by the deadline. So that's another issue that's in abeyance."

Fiame and two other members of the majority party appeared in court in Apia Tuesday where they pled not guilty to a private prosecution brought by Tuila'epa.

The legality of Monday's ceremony is still in question but a legal expert told RNZ that FAST did not carry out a 'coup'.

"Rather, they acted in a way which was necessary to prevent one," Fuimaono Dylan Asafo wrote.

"By refusing to attend the first meeting of the new parliament, it was the Head of State who first and foremost breached the relevant Constitutional procedures and any relevant Standing Orders."

The Pacific Conference of Churches has called on its member churches around the region to pray for peace and justice to prevail in Samoa, with secretary Reverend James Bhagwan saying the situation was quite concerning.

"Particularly the to and fro between the political parties," he said.

"I am not a political commentator in any way but we can see there is a need for this to be resolved and we hope that that can be done in a manner that finds resonance with the people of Samoa."

New Zealand's Ministry of Foreign Affairs has issued a statement calling on all parties to uphold the rule of law and respect the democratic process.

"We are willing to offer support to Samoa should that be useful during this complex period," it said.

However, MFAT declined to answer a direct question about whether it recognized the swearing-in ceremony as legal and official.

It would only say New Zealand "respects Samoa's sovereignty and the mana of its democratic institutions, including the courts which have an important democratic and constitutional role" and that it recognized the "combined wisdom and experience of traditional and church leaders who will want to see a peaceful outcome".

Prime Minister Jacinda Ardern said she had not spoken to the leader of either party since the election.

"We've joined with many others in just restating our faith in Samoa's democracy," Ardern said.

"It falls upon those within Samoa to demonstrate their faith in their own democracy too."

The Ministry of Foreign Affairs said it was looking forward to working with a democratically elected government of Samoa.

The Pacific Islands Forum is urging all parties in Samoa to find a peaceful resolution to the current deadlock.

Its incoming secretary general Henry Puna said forum members were closely following events in Samoa, and the group was willing to offer support and step in to help if asked.

Puna, who is the former Cook Islands prime minister, also called for a moment of reflection and solidarity across the Pacific Islands Forum for the people of Samoa, where post-election events are making global headlines.

"I ask each of us across our member nations to keep the people of Samoa in our thoughts and prayers at this time, knowing that Samoa's sovereign process and the world-renowned Fa'a Samoa will prevail at this critical moment in their history."

UN Secretary-General António Guterres has been following developments since the elections, according to a statement issued by his spokesperson.

“He urges the leaders in Samoa to find solutions to the current political situation through dialogue in the best interest of the people and institutions of Samoa,” it said.

“The United Nations stands ready to provide support to Samoa if requested by the parties.”