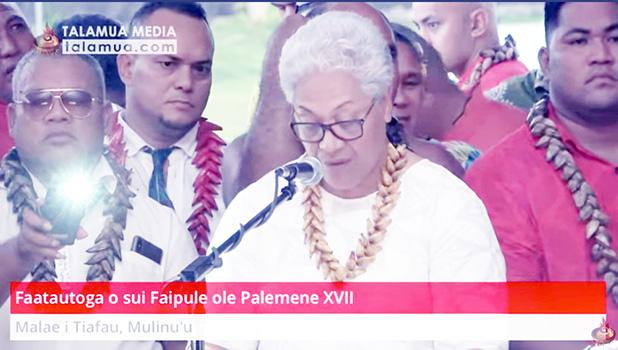 She named her Cabinet Monday afternoon in the ceremony in a large marquee tent erected on the Parliament grounds.

Whether this ad-hoc ceremony will be recognized as legal and official remains to be seen. The rival HRPP party was not there, nor was there any sign of the judiciary, the speaker, or the head of state. The appointed clerk of parliament acted as FAST's main legal counsel.

FAST had that morning been barred from entering the parliament building after Tuila'epa Sa'ilele Malielegaoi, who has been Prime Minister for 23 years and leader of HRPP, directed the Speaker to lock the doors.

Under the constitution, Parliament must sit within 45 days of an election and today was the last day for this to be possible.

FAST said the caretaker government's actions were tantamount to a coup.

"I think a coup would be accurate," spokesman for FAST Lance Apulu said when asked to describe the events of this morning. "Bloodless, but they are actually coups."

"The FAST party is abiding the rule of law. Yesterday [Sunday] the latest declaration was given by the Supreme Court ... they are pushing for the government to abide by the rule of law."

A Supreme Court decision on 17 May broke a post-election deadlock by confirming the new FAST party had a 26-25 seat majority over the HRPP.

Then, a decision by the Supreme Court on Sunday overruled late Saturday's edict by the Head of State withdrawing a directive for parliament to open today.

HRPP, which has ruled Samoa for nearly 40 years, has been refusing to hand over power. Following the swearing in, Tuila'epa called the FAST Party MPs treasonous and promised action.

His words have been translated.

"This is treason," he said. "This is law-breaking in its highest degree."

He said FAST had disrespected the country's chiefs and leaders and were mentally unfit.

"I have a piece encouragement for my government officials/public servants today, do not be worried, this party is doing what they can... all there is to do for now is to continue our hard work."

"I'm just wondering if 'those guys' are all there mentally... this isn't and will not be a government of fools."

He said only the Head of State could call Parlimentary meetings and swear people in.

"None of what they did is legitimate. The Devil has won and taken over them."

When asked about the fact that it is Day 45 since General Elections, and Samoa has not had a Parliament sitting, Tuila'epa said: "I'm going to answer that question at another, more appropriate time."

It is probably fortunate Samoa has no armed forces, but there is now immense pressure on the public service and the police commissioner, Fuiavailili Egon Keil.

Monday morning, he said his role was to enforce the law and was doing that by escorting Chief Justice Satiu Simativa Perese to and from parliament in an attempt to uphold the Supreme Court order to convene parliament.

The judiciary - already under immense pressure, which it has so far held up to — is likely to be put to the test again, but we've already seen a propensity for it to be ignored in the last few days.

Crises like these are where the head of state is meant to step in, but Tuimaleali'ifano Va'aleto'a Sualauvi had already shown he's been politically swayed, acting on the advice of Tuila'epa and the HRPP attorney general, and lacking his own independent advisors. Even so, he is not in Apia and there has been no word from him.

Tuila'epa said he wondered how the ad-hoc ceremony made Samoa look to other countries.

"They used to look at us with respect, now we are seen as fools ... they have disrespected the dignities of the chiefs and leaders of their districts with their actions today."

"That was a joke, a joke. Oh my, where have we ever seen a Speaker sworn in, in a tent? Shameful."

"I say that is enough foolishness, enough disrespect. But I am thankful to the Chief Justice for not being present at this tomfoolery."

In New Zealand Prime Minister Jacinda Ardern's post-Cabinet briefing on Monday afternoon, she said the country would encourage "all parties and political leaders" to uphold the election outcome and the decisions of institutions including the judiciary, and the rule of law.

Ardern said New Zealand was not in a position to be playing "any interventionist role".

She said despite the fact there was a "changeable" political situation, reports were that things were calm, in line with calls from political and faith community leaders.

The Federated States of Micronesia on Monday evening said they "recognized the legitimacy of Prime Minister Fiame Naomi Mata'afa".

·                Thursday, April 22 - FAST challenges the extra women's seat saying the Constitution specifies a minimum five women's seats to be heard in Supreme Court on Wednesday 5 May.

·                Wednesday, 5 May - Attorney General calls for the Supreme Court case challenging the extra women's seat be thrown out due to new elections. *Will reconvene on Friday and have tomorrow to sort arguments.

·                Friday, 7 May - Supreme Court agrees to hear a challenge to the constitutional legality of snap-elections and the extra, unelected sixth women's seat.

·                Monday, 17 May - Supreme Court hears challenge against extra women's seat, voiding it and giving FAST 26-25 majority. Finds in favour of FAST's challenge on grounds extra seat was declared after the election results had already been confirmed.

·                Monday, 17 May - Supreme Court finds Head of State acted beyond his constitutional powers in calling a snap election and voids them clearing the way for FAST to declare a majority and government.

·                Wednesday, 19 May - HRPP to challenge Supreme Court judgements, advises HoS not to call parliament. Matai and supporters of HoS arrive in Apia by busload following threats to His Highness on social media.

·                Monday, 24 May - FAST party arrives at Parliament to find the doors locked. Tuila'epa says only the head of state has the power to convene parliament and his HRPP party remains the government.