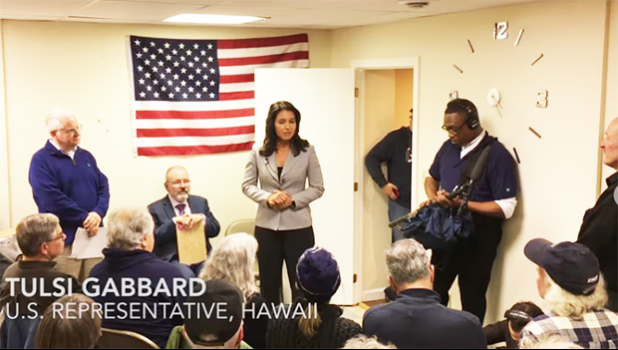 Apia, SAMOA — Samoans have embraced the announcement by Tulsi Gabbard that she will be contesting the Democrats Presidential nomination next year, as she eyes the U.S. Presidency office currently occupied by Donald Trump.

On the streets of Apia a few days after the announcement was made, members of the public the Samoa Observer spoke with were delighted.

While Gabbard was born in American Samoa, that did not matter to them. The say it would be a great occasion should a Samoan woman become the next American President.

“If she becomes the next U.S President, that would be a great thing for Samoa,” Lelei Pesamino, of Luatuanu’u said. The 52-year-old said this is history in the making and for a small country like Samoa; it’s something that should be celebrated.

“It is the first time that I have heard of anyone with Samoan connection run for the U.S. President. I really hope she wins.”

Anetelea Ioka, of Papaloloa, is positive she will. “She looks young and I’m very optimistic she will become the next U.S. President,” he said.

“Although I am not sure how much experience she has with politics, I personally think that if she or anyone for that matter has the motive to run, and then go for it. We support our people especially those who rise to become leaders. This is a big occasion for Samoa.”

Gabbard, 37, was born in Leloaloa American Samoa. She moved with her family to Hawaii when she was two years old.

Ramona Esekia of Nofoalii says Gabbard’s example should motivate women in Samoa to step up.

“Here in Samoa, women’s role in leadership is still progressing and it makes me very happy to see Samoan women making that same progress off island,” she said.  “She has plans to resolve issues in the U.S. And I hope she does win, so she can make a difference, not just for women but Pacific islanders as well.”