Samana: “911 system is broken, outdated …” fix this problem before it gets worse 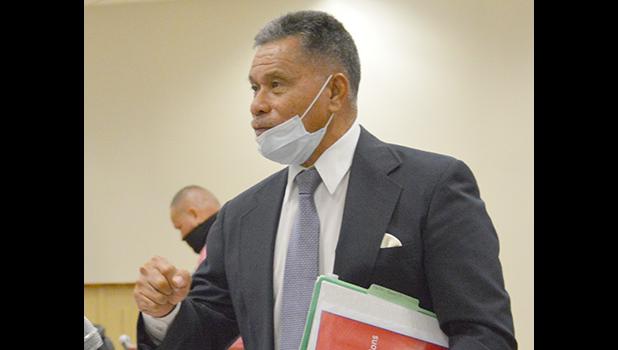 Pago Pago, AMERICAN SAMOA — “The 911 system is not only broken and outdated, but it’s nothing but an operator.”

The hearing, chaired by Rep. Avagafono Vaimaga Maiava, a former deputy police commissioner also covered the service of ‘911 system’, the many complaints from the community for the lack of response from the 911 system, and which government department is responsible for paying the 911 fees.

Rep. Faimealelei Anthony Fu’e Allen posed the question and said that it’s almost every year the issue regarding the 911 system comes to the Fono. He asked Samana to reveal the truth, if it’s broken or is it working? If it’s not working, Faimealelei wanted to know what the American Samoa Government (ASG) and the Fono can do to improve this important service.

Faimealelei said that if 911 systems are getting old, the public can be in danger when they fail.

Samana told the committee that the problem with our 911 system is that it is broken and outdated. There is a serious need to fix this problem before it gets worse.

“We’re in a technological world and we need to upgrade our 911 system with the new modern technology we have on hand,” Samana told the committee.

He explained that if you dial 911, the dispatcher at the 911 will contact EMS personnel to inform them about the call. Once EMS personnel receive the information, 911 then hang up the phone.

“So our 911 is nothing but operators,” Samana said.

The good news is according to Samana, there is a system which the DHL call, the GIS system (Geographic Information system) where they can pinpoint were every house is in American Samoa. This GIS was used during the GITA cyclone in 2018 and it really helped their team when they went out to every home for their site visit and assessment. The GIS system was operated by the Department of Commerce (DOC) but now, according to Samana it is under his department.

He further explained to the committee that one of the advantages of the GIS system is you don’t need a lot of information to get the location. Just press the system button and let it run through the process.

“If you call our current 911 system for an emergency, you have to explain to the dispatcher that the house is behind the church building next to the store at the three corner — and by the time EMS reaches that area the patient is already dead. However if we switch to this new GIS system, it will easily do the job without any other problem,” Samana told faipule.

The operation of the 911 system according to Samana is not necessary to be under DPS, it could be a stand alone or it could be under DHL. He’s hoping to speak with the acting Police Commissioner to discuss this issue but he believes the 911 system should be operated under his department because there is also funding for monitoring the GIS system.

With the new GIS system on line, Samana said that training for dispatchers is vital.

“The dispatcher is the first person to gather clues and cues about an emergency. An experienced, well-trained dispatcher is able to gather a lot of high quality, vitally important [information] that can help first responders form an early understanding of what they will be facing upon arrival at the emergency scene,” Samana explained.

He further stated that callers are often distraught when calling 9-1-1 and the dispatchers have the difficult task of both calming the caller and extracting quality information from them.”

With the issue of 911 fees, Samana told the committee that he doesn’t know who is responsible for collecting 911 fees.

Galumalemana and Foifua added their piece of information to the puzzle.

Despite comments that the 911 system is broken and outdated, Galumalemana assured representatives that people handling the 911 calls “are most qualified and well-trained people for the field.”

The Chief of EMS agreed that the dispatchers’ work is very important in collecting all the necessary information pertaining to an emergency. He supported Samana’s idea to use the new GIS system and that system must also be operated by DHL.

Acting Police Commissioner, Foifua supported the idea of providing more training for dispatchers to help them with their daily tasks. He said that despite the limited resources we had in the past, he salutes the 911 system and the dispatchers for doing their best to serve the community. He said the work is not easy but it’s all about sacrificing your time and yourself for others.

Swains representative, Rep. Su’a Alexander Eli Jennings said that one of the many reasons why the 911 issue was among the subjects to discuss in the hearing was because of the suicide prevention program in the territory.

Su’a said he was sad to learn that there has been funding already in place to upgrade the 911 system but nothing has been done.

“We don’t have time, we need to expedite and establish this 911 problem. If there’s a way we can do it, let’s fix it for those people out there and who really need this service,” Su’a said.

With regards to the 911 fees, several committee members told government witnesses that American Samoa has not collect any 911 fees and thus there are no funds to divert.

Vaifanuatele Faipule, Lavea Fatulegaee Palepoi Mauga said that this is the same issued raised last year where the Commissioner of the FCC (Federal Communications Commission) wanted to know where did American Samoa’s 911 fees go.

Tualauta Represenattive, Larry Sanitoa said this problem is long overdue and problems continue to happen. With the funding available under DHL, Sanitoa hopes that things will be fixed and the new system will be up and running.

Samana requested committee members to give them extra time to sort out things and set up a solid plan before they switch from the 911 old system to the new GIS system. He also assured representatives that there’s funding available for training under his department.

In the beginning of last year, a commissioner of the Federal Communications Commission, Mike O’Reilly, had written to the governor requesting the report for 2018, which the territory had failed to provide in 2019.

In response, Gov. Lolo Matalasi Moliga at the time stated in his letter that the delay in providing the information is regrettable but was due in part to significant staff turnover. He said that American Samoa’s situation as it pertains to 911 fees has not changed,

“American Samoa thus does not collect any 911 fees and thus there are no funds to divert,” said Lolo.

He informed Commissioner O’Reilly, “our 911 system is fully funded by our general fund and budgeted by the Department of Public Safety.”

ASTCA provides phone lines to the Department  of Public Safety for the 911 service.  The calls are free. DPS just pays for the phone service just like any other ASTCA customer.