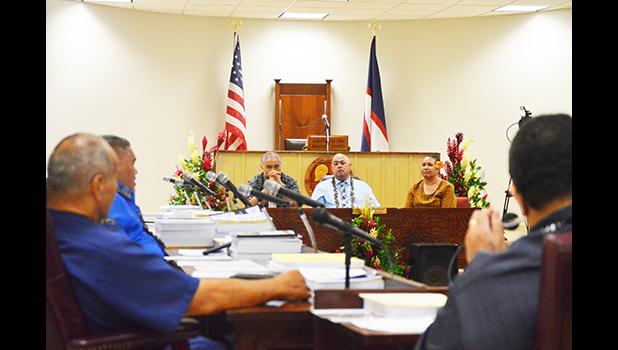 Pago Pago, AMERICAN SAMOA — Despite claims by Manu’a #1 Representatives that students of the Manu’a High School (MHS) did not receive food for either breakfast or lunch Wednesday thru Friday during the first week of school, a report from MHS, which was distributed to faipule during a House Education hearing last Friday revealed that food was served the first week of school.

According to the signed report, there was no school on Monday and Tuesday with classes held only Wednesday to Friday, January 5- 7, 2022.

According to the report, on Wednesday, Jan. 5, school lunch staff at the school served 35 breakfasts and 35 lunches.

On Thursday and Friday, staff served 36 breakfasts and 36 lunches each day.

The report is signed by the school lunch chef at MHS and was received by the School Lunch Program manager in Tutuila, Christina Fualaau. She was the one who distributed the report to faipule during the House hearing last Friday to discuss the issue of why students at MHS did not receive food on the first week of school.

The report from the Manu’a HS distributed by DOE SLP officials during a House hearing last Friday shows that Manu’a HS students received food for breakfast and lunch Wednesday to Friday, Jan. 5-7, 2022, despite reports to the contrary. [photo by AF]

Witnesses who appeared before the committee for the hearing included AS-DOE director, Talauega Dr. Samasoni Asaeli, along with the Manager of the School Lunch Program, Christina Fualaau, and the Governor’s Officer Representative (GOR) for Manu’a, Sualevai Nofoaiga Sualevai.

It was Rep. Alumamalu Filoialii Ale who voiced this matter during the House Session last week. He stated that he was on his way back home after the House session on Tuesday morning when he received a phone call from members of his constituency, informing him that MHS students had not received food from the school lunch program for breakfast and lunch on the first week of school.

The teachers and parents had worked together to find ways to feed students.

Alumamalu told members of the House that he was very disappointed because the problem happened on the first week of school, noting that AS-DOE had enough time to prepare for the new school year but its appears that this is an ongoing problem from the past.

Vice Speaker of the House, Hon. Fetu Fetui Jr echoed his colleague statement. He said that this is not the first time this has happened.

When questioned by Fetu during last Friday’s hearing, DOE director, Talauega, along with the manager of the SLP, Fualaau both stated to the committee that they never receive any reports from the MHS about a shortage of school lunch supplies.

Fualaau told the committee that every time they ship supplies for schools in the Manu’atele, they provide the supplies for three months. The last shipment for school lunch supplies for Manu’a was the last week of November of last year, and this supply was to cover December to February of this year.

Fetu was not satisfied with the answer. He said he puts the blame on director, Talauega, SLP manager, Fualaau, and the GOR for Manu’a, Sualevai for not doing their job.

“It’s your responsibility to call the school lunch staff in Manu’a, ask them if there is anything they need. Don’t wait for them to call you, you pick up the phone and call them. Very easy and very simple,” Fetu said.

Fetu also blames Sualevai for not fulfilling his duties as the GOR for all islands of Manu’a.

Rep. Vaetasi Tuumolimoli Saena Moliga asked Fualaau whether she had received any report from the school lunch staff in Manu’a about the supplies that were shipped on the last week of November — whether they received it or not.

Fualaau replied, yes, she received the report from her staff in Manu’a indicating that they received the whole shipment. The report was also signed by the chef in Manu’a.

Vaetasi said if that is the case, then the problem is the distribution of food to students everyday and how to control the usage of the food supplies.

Rep. Vailiuama Steve Leasiolagi told the committee to read the report from the MHS because it clearly stated in the report that food was served to students on the first week of school.

Vailiuama said that the report from the people in Manu’a who contacted their faipule was false and the signed report before the committee proves it.

Talauega and Fualaau echoed Vailiuama’s statement and told the committee that according to the report, food was served to the MHS students on the first week of school.

Fualaau also informed the committee that the school lunch storage in Ta’u is almost done and once the work is completed, all school lunch supplies for Manu’a will be stored inside the new facility.