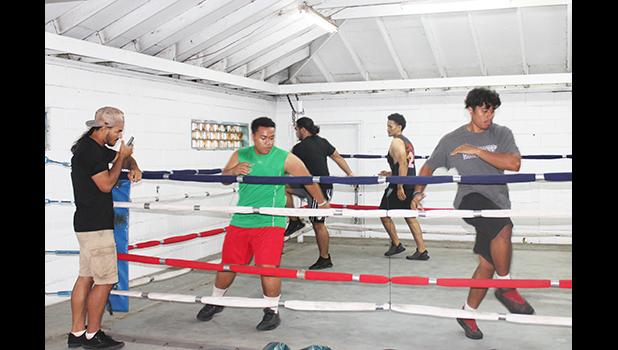 Pago Pago, AMERICAN SAMOA — With less than 3 months until the Oceania Boxing Championship in Apia next year, the American Samoa Boxing Federation (ASBF) boxing team is hitting the training trail at the Veterans Stadium in Tafuna.

“Our main goal is to win more gold for American Samoa at the Oceania next year,” said the ASBF Head Coach and Trainer, Sala Sanele Etuale during an interview with Samoa News last week.

“We’re been training for 3 weeks now and my main focus is to deal with the team’s fitness, while at the same time preparing them for the big challenge ahead.”

According to Sala, this is the same team that won the Flag Day Championship in Apia last September and he’s willing to add few other local boxers to the team list.

Sala said the 2023 Oceania Boxing Championship is an Olympic Qualifying tournament, and the team must win gold in order for them to compete at the 2024 Olympic Games in Paris.

“This is a huge challenge for our team and we’re doing our best to make sure our team will be well prepared for the challenge, physically and mentally.”

When questioned about his training and preparation, Ioane said that aside from training in the ring with his coach, he also spent two hours a day at the ocean swimming laps. Swimming is not the only water-based activity Ioane does to improve his performance in the ring. He also practices holding his breath under water.

The American Samoa Boxing Federation (ASBF) boxing team with their head coach, Sala Sanele Etuale after their training session last week to prepare the team for the Oceania Boxing Championship in Apia in February next year. [photo by AF]

In promoting boxing in school, Sala explain that ASBF is promoting a new era in the sport — not only to promote boxing by recruiting more youth to build the sport in the territory but at the same time helping the youth of American Samoa channel their activities in a positive direction.

Speaking to Samoa News on the subject last week, Sala stressed the importance of working together with young people to not only promote the sport but also to create positive ways for them to use their time and talents.

“As we start this new camp, our goal is to train these young people so that one of them will one day represent American Samoa in the Olympics, and medal at the Olympics one day,” Sala said.

One local boxer is still training off island, according to Sala. Jolando Taala is training in Las Vegas and he doing good with his training. Taala, who left the territory last week after a short visit to his family and his boxing club, will also be part of the ASBF team for the Oceania next year, according to Sala.

Sala further explained that ASBF has its own ring at the Maliumai Beach Resort in Fogagogo. According to Sala, they only have a little shelter for the ring so that the boxers will have something to start out their training. Despite the fact that the government gives no support at all, Sala said that they will continue to provide for the kids through the limited resources they have — making sure the kids have everything they need for their training.

“We will keep trying our best to train these young boxers and very soon we’ll get a medal at the Olympics and that’s our goal,” Sala said.

“Our focus is to promote the sport and continue to train our young people who had the talent in boxing so that one day, they will become champions.”