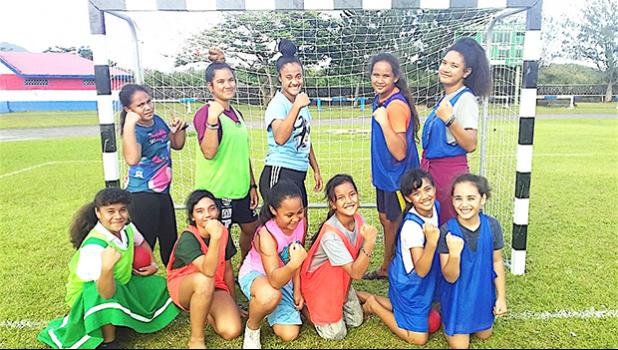 Pago Pago, AMERICAN SAMOA —  The American Samoa Handball Association is actively recruiting the territory’s most athletic girls and boys to train and compete for an opportunity to represent American Samoa at the 2022 Youth Olympics in Senegal, Africa.

Eight boys and eight girls born between 2004 and 2006 will complete the team.

Coaching the Under-16 girls’ beach handball team is Naomi A’asa and Luava’a Tofaeono.  Both girls are experienced Olympians, having competed in the 2018 Youth Olympics in Argentina.

Naomi is also a 2017 Oceania gold medalist in the youth division, and a two-time Oceania silver medalist in the senior division. She also owns the distinction of being the American Samoa National Olympic Committee Junior Female Athlete of the Year 2018.

Naomi has been playing handball for 3 years and was also a member of the 4th place finish Indoor Women’s Junior Handball Team.

“It has always been part of our strategic plan to elevate elite players to become coaches and referees. Since we are producing a sport that is not very well-known here in our territory it is important that we develop from within. Both of these girls have shown a commitment to the sport and great leadership skills. They train very hard and I am confident in their ability to lead younger girls,” said ASHA president CJ Sagapolutele Floor.

Naomi is a graduate of Lupelele Elementary and Leone HSl and now attends ASCC. When asked about this opportunity she said, “I’m looking forward to becoming a coach because I want to share my experience with the younger age group coming up. I want to use this opportunity given as a moment of learning and improving on my skills for tomorrow.”

Naomi is a right wing on the National Women’s Beach Handball Team which is heading to Serbia in August for a summer handball camp in preparation for their next competition in Los Angeles at the SoCal Cup, also taking place next August.

“In the 3 years of being in this sport, I’ve held three major roles: national player, referee, and team captain for our tournaments. Basically, as I was given those titles, I was able to gain more experience in leadership and it helped improve my skills within the game. It provided me with a firm understanding of the conflict most officials go through so I am now alert of what is needed or not. Personally, becoming a coach will benefit my life, individually, in many ways. This opportunity will give me a chance to organize, coordinate, and teach my knowledge of the game to the young ones. I believe with the assistance's of my teammates and coaches, I will accomplish my goal which is to provide our local athletes with a dream of participating in the Olympics - and it is possible. I can't wait to begin my journey as a coach and I do pray for handball's future plans to come true with the support of our island.”

Luava’a has been a National Team Player for almost two years and has earned two Oceania senior level silver medals. She was a member of the 2018 Youth Olympic Team.  A graduate of Leone HS, she currently attends ASCC.

“Va’a adapted very quickly to the game. She’s athletic and has great jumping ability from her experience through volleyball. I saw that right away and utilized her jumping ability to play strictly defense in the beginning and she mastered that. Now she plays both sides of the ball and has one of the most dangerous shots. Both girls bring a different aspect of the game. Naomi’s a very quick offensive player and a pesky defender; whereas Va’a’s defense is based on timing her jump to the shooter while her offense is in the strength of her jump and the power of her shots,” said Floor.

Captain of the U16 Women’s Beach Handball Team is Lynette Liu, the 2019 Oceania Championships MVP.  Lynette has been playing handball for all of ASHA’s 5 years. She and her sister (2018 Youth Olympian Jasmine) attend Tafuna HS and play on the Youth, Jr. and Senior Wowens’ Beach Handball Teams.

“It’s quite obvious that we are building a team around Lynette. We have some good athletes trying out right now and I’m hoping to see more girls take advantage of this wonderful opportunity to train and compete for the right to be in the 2022 Youth Olympics,” said Floor. “Being trained by coaches who have Olympic experience along with Oceania’s most valuable senior player being on the youth team is a wonderful way to kick off the new squad for the Youth Olympics.”

ASHA is also recruiting boys born between 2004 and 2006 who would like the same opportunity. Eligible boys are encouraged to sign up on Wednesdays at Veterans Memorial Stadium between 3-5 p.m.

In addition to a U16 Boys Beach Handball Team, ASHA will be entering the 2020 Oceania Championships with 14 U17 and 14 U21 players. The tournament is being considered for the Cook Islands next summer. “We would love to see boys come out and play handball. It is difficult with so many boys playing football but for any boy that does not play football and would like an opportunity to compete, travel, and win, we have the right spot for them,” said Floor.