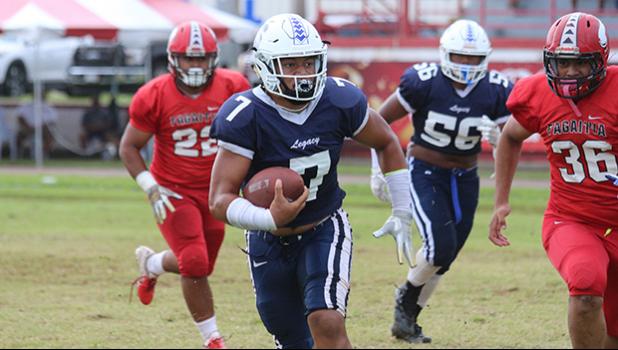 Next Tafuna went up against Leone in a one sided sweep,  Tafuna 60 to 0 for Leone. Fnally the Fagaitua Vikings and the Samoana Sharks came back for a rematch after last year’s championship game. It ended with Samoana 34 - 12 over Faga’itua.

Former Faga’itua Vikings Jesse Toilolo, carrying the rock for the Crusaders, as he now leads the Marist team to this year’s ASHSAA Football Season. Toilolo scored the winning touchdown and the two points for Marist 8 - 2 victory over the Wildcats. [photo: Tony Gasu]

Former Tafuna Warrior, Starlight Lotulelei who is now the starting quarterback for the Faga’itua Vikings trying to break a tackle from Vaifanua Peko Vai, after picking up huge yardage for the Vikings this past Saturday morning. Unfortunately,  Faga’itua suffered a 34 - 12 loss against Samoana. [photo: Tony Gasu]