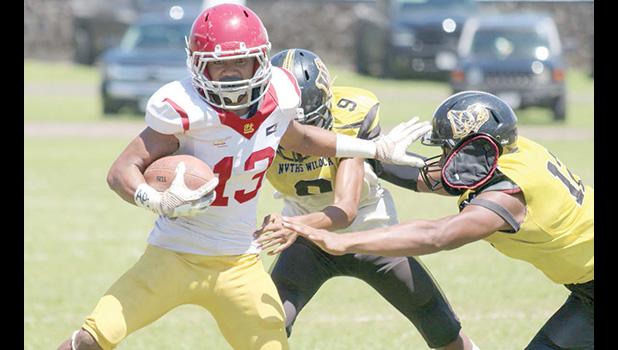 Tafuna bested the Nuuuli Wildcats 66-0 while it was Samoana over the Marist Crusaders in a 52-14 match up.

Tafuna Warriors quarterback, Okland Salave’a — who is being touted as a sure pick for a major college spot — is shown here beating the last Nu’uuli Wildcats defender to the sidelines, as Salave’a took this quarterback keeper all the way downfield for a 79 yard touchdown reception – Salave’a led the Warriors to a 66 - 0 victory over the Wildcats this past Saturday at the Veterans Memorial Stadium. [photo: Tony Gasu]

Samoana Sharks ball carrier Marcus Samia (5) weaving his way through the middle of the Marist Crusaders defensive unit and comes face to face with former Samoana Sharks All-Star cornerback, Anthony Milovale (2) at midfield during their varsity match up last Saturday morning – Samia helped the Sharks in their 52 - 14 win over the Crusaders. [photo: Tony Gasu]

Nu’uuli Wildcats ball carrier is immediately wrapped up by Tafuna Warriors Francisco Mauigoa in the backfield for a loss of yardage during their varsity match up last Saturday morning. Mauigoa helped the Warriors in their 66 - 0 victory. [photo: Tony Gasu]

Samoana Sharks quarterback Viliamu Tanielu releases a pass just seconds before he was rocked by Marist Crusaders linebacker, Marcus Aunoa during the first half of their varsity match up last Saturday morning. Tanielu led the Sharks in their 52 - 14 win over Marist. [photo: Tony Gasu]

More photo will be posted on our Facebook page.