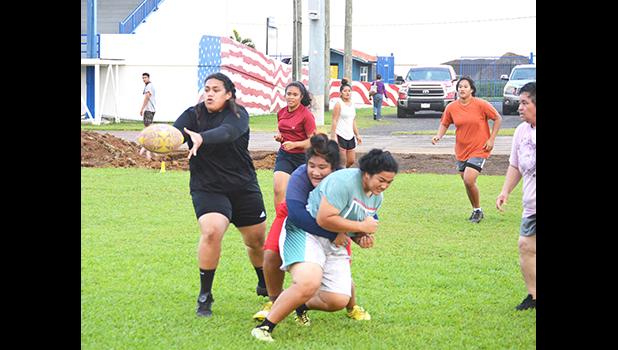 Pago Pago, AMERICAN SAMOA — A squad of 13 females has been selected by the American Samoa Rugby Union (ASRU) to represent the territory — for the first time ever — in the Women’s Rugby 7s at the 2019 XVI Pacific Games in Samoa next month.

In an interview this week with the team’s head coach, Annielyse Coffin, Samoa News was told that the goal is to use this experience at the international level as a first taste for local players, and to give them confidence.

Coffin said this is the first time ever, that a women’s rugby 7s team from American Samoa has been selected to participate in international competition.

The team consists of 9 new players and 4 veterans.

“Our main goal is to teach the rules and how to play the game in its basic form,” Coffin told Samoa News.

She said their preparations have been good — so far — as they work on fitness and ball movement.

“We’re trying our best to teach the players how to understand the basic rules of the game, especially the new rules that apply at the level where the game is being played around the world at this time.”

The roster features young teens. Two graduated from high school last week, and one is a 17-year-old whose parents have given the green light to the ASRU to allow her to play for American Samoa.

“We’re ready for the Pacific Games and we’re looking forward to competing with some of the top women’s rugby 7s team from other Pacific nations such as Fiji, Samoa, and Australia,” Coffin said.

“During our first week of training, the players were reactive, waiting for leadership and direction. They were reluctant to challenge or be proactive, reluctant to make a mistake, reluctant to try something, until they fully understood it 100 percent.

Coffin said she has told the players that this is their chance to create history.

When asked for a comment, team trainer, Telasio Koroiadi from Fiji said the team is still young and has a lot of potential for the sport.

“We’re still a young team so I think there’s a really exciting future ahead for us. This Pacific Games in Samoa next month is a good place for our young team to start,” Koroiadi said.

“During our training, the girls are really excited. I think it’s the first time American Samoa will play on the international stage against other top teams in the Pacific. So no pressure on us, we’re just going to go have fun and see what happens.”

In order to promote rugby for women in American Samoa, Kodoiadi says there is a need for more tournaments for local rugby clubs.

According to a schedule received from Samoa yesterday, 12 countries will compete in Rugby 7s during a two-day tournament (12-13 July) at Apia Park Stadium. The tournament kicks off at 10a.m on 12 July with Fiji playing Solomon Islands in the women’s competition.

The draw was decided on ranking from the 2018/2019 HSBC Sevens Series; ranking from Oceania Sevens Championships; and the 2017 Pacific Mini Games.

For the women’s competition, teams are placed in two pools of four teams. Within each pool, all teams play each other (three matches per team). Quarterfinals will be played after pool matches. The winners of the quarterfinal matches proceed to the semifinals.

The winners of the semifinal matches proceed to the gold medal match and the losing teams to the Bronze medal match.

American Samoa is in Pool A with Australia, Samoa, and New Caledonia. Fiji is in Pool B with Papua New Guinea, Nauru and Solomon Islands.