Boxing Federation works to channel youth in a positive direction 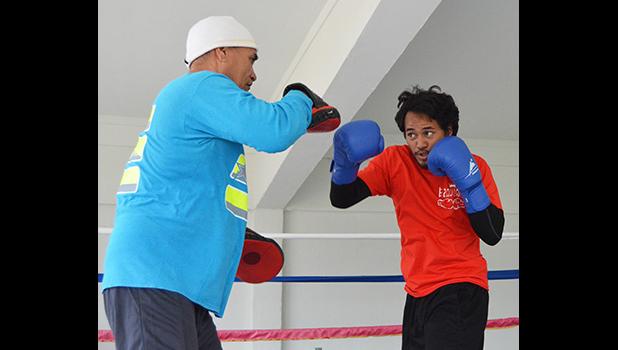 Pago Pago, AMERICAN SAMOA — The American Samoa Boxing Federation (ASBF) is promoting a new era in the sport — not only to promote boxing by recruiting more youth to build the sport in the territory but at the same time helping the youth of American Samoa channel their activities in a positive direction.

Speaking to Samoa News this week, ASBF President, Paepaetele Mapu Jamias stressed the importance of working together with young people to not only to promote the sport but also to create positive ways for them to use their time and talents.

“As we start this new camp, our goal is to train these young people so that one of them will one day represent American Samoa in the Olympics, and medal at the Olympics one day,” Paepaetele said.

“This is not about money, this is about American Samoa. We’re working in this field free of charge in order to train these young men to become champions and ambassadors for American Samoa in the future,” Paepaetele said.

ASBF has its own ring at the Maliumai Beach Resort in Fogagogo. According to Paepaetele, they only have a little shelter for the ring so that the boxers will have something to start out their training. Despite the fact that the government gives no support at all, Paepaetele said that they will continue to provide for the kids through the limited resources they have — making sure the kids have everything they need for their training.

“We will keep trying our best to train these young boxers and very soon we’ll get a medal at the Olympics and that’s our goal,” Paepaetele said. He also expressed his gratitude for the never-ending support from his officials including head coach and long time trainer, Sala Sanele Etuale and assistant trainer Tiatia Matauaina.