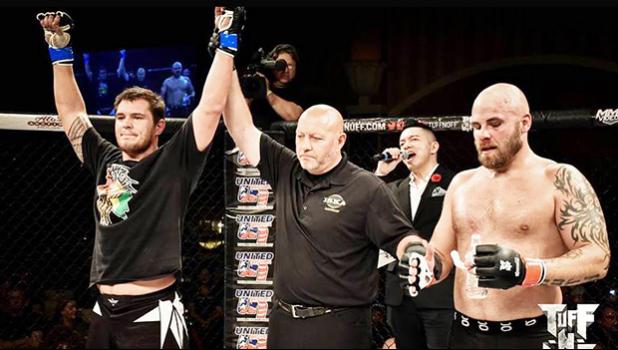 Unable to find an opponent at his normal 205lbs fighting weight, CJ bumped up to the 235lbs class to fight Las Vegas resident Justin Andersch, who made his MMA debut. Floor, fighting out of 9th Isle BJJ, dominated the fight from the opening bell. With a few punches and hard wrestling, CJ again dominated with his wrestling ground game.

He is coached by American Samoa's Deutsch Pu'u.

"I'm looking forward to training and getting back in the cage as soon as possible," CJ told Samoa News earlier this week.

"I'm very proud of my son. I thank God for his protection and all of the different wrestling coaches and partners who have contributed to my son's success. Seeing CJ training with Pu'u allows me to sleep at night knowing that he is in great hands," said Carl Sagapolutele Floor, CJ's father.

Coach Deutsch Pu'u said, "Coming back from a 4-year break meant a lot of work was needed to get back into fight shape. And CJ handled training camp like a pro. He recognized he had a lot of work to do, took it all into consideration, and immediately got to work!

“His original opponent was supposed to fight him at 205lbs; however, that opponent pulled out, so we immediately stopped the weight cut due to the fact that the fighter who stepped up to fight CJ fought in the heavyweight division at the weight of 235lbs,” he said.

He continued,"We came up with a game plan and CJ stuck to it like glue. In the end, CJ totally dominated his opponent, successfully returning to the cage in dominant fashion. I plan on taking a few more fights for CJ as he is only 1 fight into his return at his natural fight weight of 205lbs, before considering a move to a possible professional career."