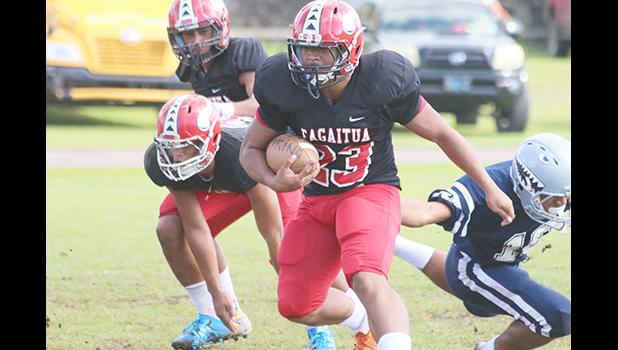 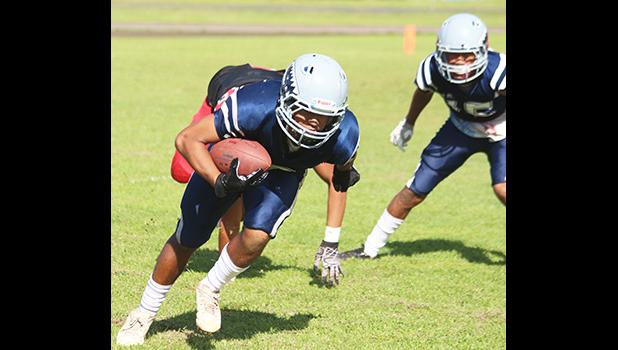 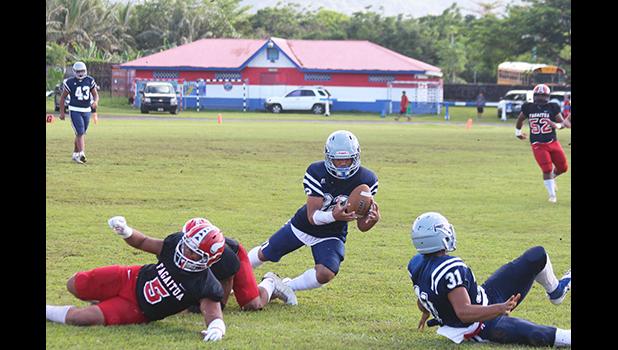 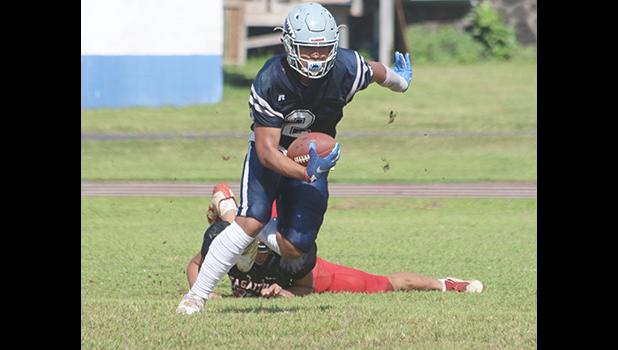 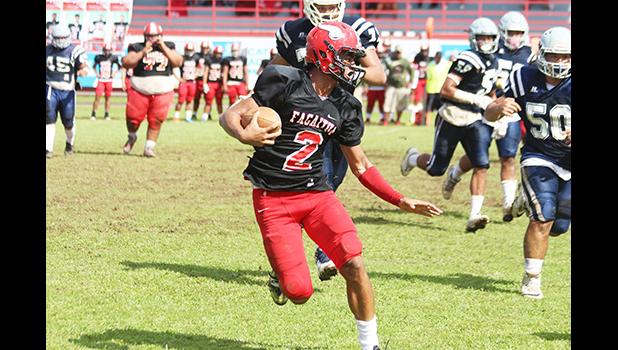 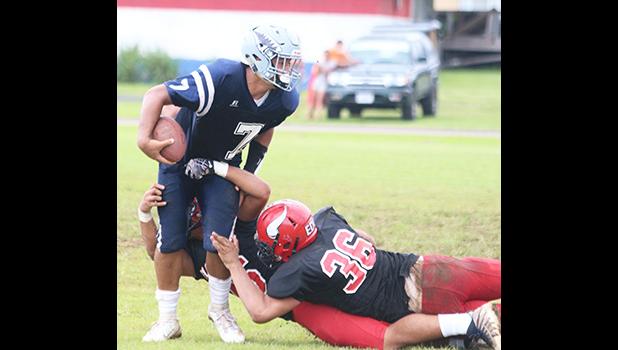 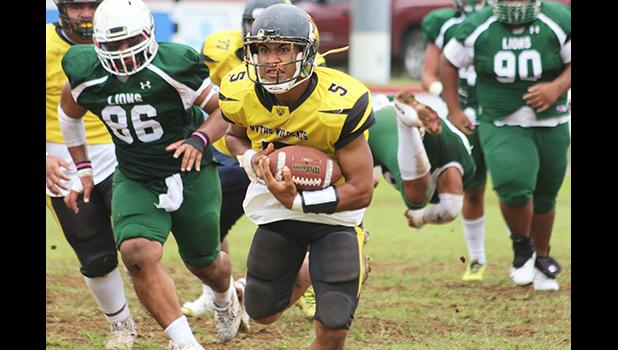 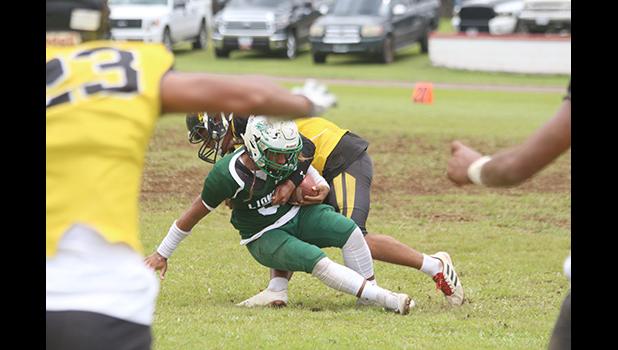 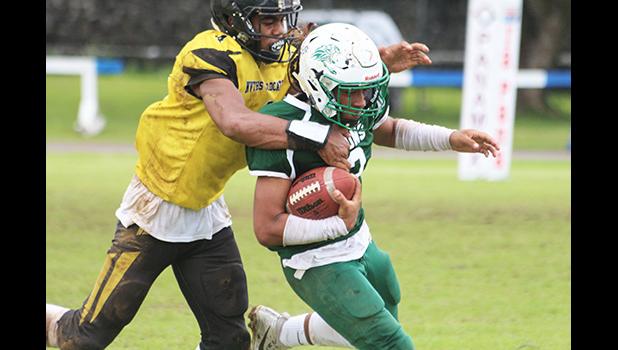 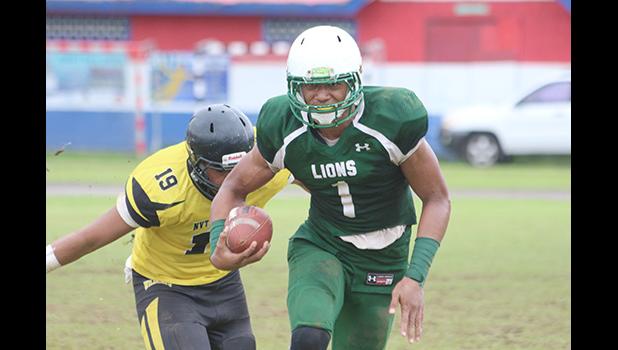 Pago Pago, AMERICAN SAMOA — In the ninth week of ASHSAA football’s regular season, the Beast from the East reclaimed honor and dignity after a heart stopping match that concluded in favor of head coach Sua’ese Pooch Ta’ase and the Faga’itua Vikings - a match that went down to the wire.

After a harsh 34-8 loss against the Samoana Sharks in the first round, Faga’itua made sure it didn’t happen a second time as they’ve now beaten the only team that they lost to this season – And it felt good to finish off the regular season on a high note.

The Vikings now go into bye week to await who will play them in the championship game. Coverage of ASHSAA football is sponsored by Congresswoman Aumua Amata.

During the second match of last Saturday’s action packed football weekend, the Leone Lions and the Nu’uuli Wildcats both celebrated and recognized their Senior players - during Senior Game - which concluded in favor of the Lions after a thrilling 30-24 victory.

Head Coach Sua’ese Pooch Ta’ase and his Big Red Machine deciphered the perfect strategy to keep the Sharks threatening ‘Air Attack’ at bay, and that was to bring out the most vicious defensive pressure they could to keep Samoana’s quarterback Viliamu Tanielu out of the pocket, while their defensive backs zoned the backfield and watched for any long passes that came their way – It worked out well for the Vikings.

Samoana’s offense turned the ball over twice after receiving the opening kick-off and got an earfull from Head Coach Pati Pati early in the match. It was the perfect motivation to get them back on track as Tanielu and his offense made sure they put the first six points on the board

9:13 into the opening quarter and Tanielu fires a quick slant pass to Kobe Lefiti for a 35 yard touchdown reception.

Faga’itua knew that they had to score to lower Samoana’s morale, or else the Sharks would escape with this one again. Doing what they do best on the ground game, the Vikings offense led by their ‘All-Purpose’ player Manuita Sofeni quickly moved the chains downfield after a brutal running game straight down center-field, and they advanced into the end zone after a big carry by Sofeni to the 1 yard line. From there, Fitu Amata snuck behind his offensive line into the end zone for Faga’itua’s first touchdown of the game with just 8:26 into the second quarter.

The two point attempt was a quarterback keeper by Manuita Sofeni to put the Vikings in the lead 8-6.

Samoana stuck with it and made progress midway into the first half. Viliamu Tanielu fired a long pass to Avory Seumanutafa to bring Samoana to the 1 yard line for a first down. From there, Tanielu rolled out with the play action pass and connected with Allen Seagai at the corner of the end zone for Samoana’s second touchdown of the game with 5:20 remaining in the first half. The two point attempt was a roll out pass to Malaetasi Amisone to extend the lead 14-8.

Late in the first half with just 2:11 remaining, the Vikings broke through Samoana’s heavy defensive coverage as Sofeni slipped through the middle and out to the end zone for a 20 yard touchdown reception to tie up the game 14 a piece. The two point attempt was a reverse halfback pass to Jessie Toilolo that brought Faga’itua up 16 -14.

But Samoana wouldn’t lay down. Viliamu Tanielu led the Sharks downfield on back to back quarterback keeps to move the chains inside the red zone. And with just 46 seconds remaining in the second quarter, Samoana scored again.

The two point attempt was a roll out pass to Kobe Lefiti that put Samoana up.

It was a defensive showdown to open up the second half, as Samoana’s defense was the first to let up when Faga’itua’s no-huddle ground game broke Samoana’s heavy defensive coverage again and Sofeni bounced out to the sidelines from the 25 yard line to score another touchdown for the Vikings. The two point attempt was a reverse hand off to (#54) which put the Vikings up 24 - 22 with just 19 seconds remaining in the third quarter.

Early in the fourth, the Vikings stuck with the running game as they knew Samoana’s defense wouldn’t hold up much longer – 8:20 in the final quarter and Samoana’s heavy defensive coverage wasn’t prepared whey they saw Manuita Sofeni pulling back from the run and looking wide to fire a pass to Fitu Amata for a 24 yard touchdown reception.

The two point attempt had Samoana’s defense formed up wide for the quick pass, but they were disappointed when they saw Sofeni bulldozing his way up the middle to cross the goal line as the Vikings extended their lead 32 - 22.

Samoana worked out some good passing plays to move the chains downfield after several good receptions by Seagai and Amisone – Samoana’s first down from the 12 yard line and Tanielu fires a quick slant pass to Seumanutafa to score for the Sharks.

Samoana’s final offensive possession of the game from midfield late in the fourth quarter would’ve been the game changer, when Tanielu fired a perfect pass to Seagai who hauled it in and scored – But a flag in the backfield penalized Samoana for holding in the trenches moved the ball 10 yards back.

With just seconds remaining in the game, Faga’itua’s defensive backs were all over the backfield awaiting the pass, as Tanielu was pressured hard by vicious Vikings defensive linemen who sacked him far in the backfield and closed this one off.

Leone Lions offensive unit led by quarterback Fa’alili Fa’amoe didn’t hesitate to go to the ground game to move the chains downfield – After a good running game led by their freshmen running back Wylan Faga, the Lions were already knocking at the door from the 1 yard line with just 7:22 into the first quarter. From there, Fa’amoe took it and scored the first touchdown of the game.

The two point attempt was a play action pass from Fa’amoe to Pearson Livi that put the Lions up by 8.

With just 4:11 remaining in the first quarter, the Wildcats were on the move and wanted to take their shot at the end zone, and they did – After some good carries by Joe Savaii, the Wildcats were in range to score inside the red zone. Nu’uuli’s second down from the 5 and quarterback Nathaniel Maea muscles his way past Leone’s defensive line to score the Wildcats first six points of the game.

Midway through the first half, Fa’amoe coughed up two good passes to Elijah Elisara and Pearson Livi to spot the Lions a threatening first down from the 10 yard line. The Lions then executed a reverse hand off to Joshua Taani to score Leone’s second touchdown. The two point conversion had Fa’amoe crossing the goal line on a quarterback keeper to keep the Lions in the lead 16 - 6.

The Lions thought they were in control, but Nu’uuli’s offensive coordinator William Lobendahn still had some tricks up his sleeve, coordinating some good offensive trick plays to move the chains downfield for Nu’uuli – 2:16 remaining before halftime, and the Wildcats strike again when Nathaniel Maea sat in the pocket after a fake hand off to Savaii and fired a quick pass to Calloway Alosio to score Nu’uuli’s second touchdown.

The Wildcats defense led by Charlie Toa Leama and AJ Masunu fired up Nu’uuli’s defensive unit to prevent the Lions from getting into Wildcat territory throughout the whole third quarter.

Leone’s defense returned the favor as they had Fa’amoe also leading the defense alongside Pualau and Cyan Fiatoa. It was a scoreless third quarter. Then early in the fourth quarter, the Wildcats were pummeled by Cyan Fiatoa and his defensive linemen, after Fiatoa not only tackled Maea in the backfield to create a fumble, but also recovered the fumble inside the red zone to bring out the Lions offensive unit in a very good field position.

Fa’amoe with a couple of carries spotted the Lions a first down at the 1 yard line. With just 10:38 into the fourth quarter, Fa’amoe crossed the goal line to score, extending the lead 22 -12.

Leone’s first and goal from the 5 yard line, and Fa’amoe sends Taani straight up the middle to score another Leone touchdown. It was now 30-12 in favor of the Lions.

But the Wildcats didn’t give up. Maea leading Nu’uuli’s offense on the field went to the passing game and stuck with it to move the ball downfield.

4:57 remaining in the ball game, and Maea decides to tuck and run with it to score for the Wildcats from the 10 yard line. The Lions decided to bring back their former quarterback Tolutasi Aumua - who was injured and pronounced out for the season during the first round of action – He was back in the hot seat for the Lions late in the game, and didn’t enjoy his welcoming party when the Wildcats defense brought the heat to put him right back on the sidelines.

Aumua was back and the Lions felt comfortable having him back in the pocket – But they were shocked as they went into shotgun formation, and the snap to Aumua went over his head, and the live fumble was picked up by AJ Masunu who returned it all the way back for a 65 yard touchdown reception for the Wildcats as they closed this one off with the final six points of the game.