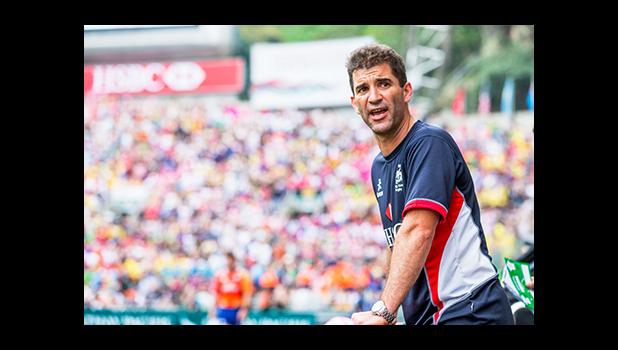 Baber, who was appointed as the men’s sevens coach and head coach of the elite rugby sevens program at the Hong Kong Sports Institute in 2013, will assume his new post early next year.

Baber has been appointed on an initial four-year contract with Fiji, which will take the reigning Olympic champions through to the next Summer Games in Japan in 2020.

“As a coach, this is an incredible opportunity to work with the present world and Olympic champions. Coaches, like players, need to constantly challenge themselves; I want to continuously strengthen my knowledge of the game and the competition level that Fiji operates at will provide that opportunity.

“This appointment would not have been possible without the support of the Hong Kong Rugby Union and the opportunities they have given me. I have tremendous affection for Hong Kong and Hong Kong rugby and if there is one positive to my leaving it is the opportunity to work with Fiji Rugby, who have such a special relationship with the city, and the chance to return every year during the Hong Kong Sevens,” Baber said.

"My time in Hong Kong has been amongst the most rewarding in my career and I thank the Union and the community for their support and wish the HKRU the greatest success across every level of the game,” Baber added.

In his time with the HKRU, Baber has been instrumental in developing greater depth in Hong Kong’s men’s and women’s national sevens squads and junior programs. He leaves the Union in a strong position, with the men’s seven coming within ten minutes of a place at the 2016 Rio Games and having won their third Asian sevens title in five years earlier this month.

Recently hired assistant men’s sevens coach Jevon Groves will assume coaching duties in the interim while the HKRU undertakes a search for Baber’s replacement as the head coach of the elite Rugby Sevens program at the Hong Kong Sports Institute.

Baber can reflect on his time in Hong Kong with pride: “We have had significant success on the pitch, but I am most pleased with our accomplishments outside the public eye, particularly the way that the players have embraced what it means to be full-time professionals, in a training environment or under the pressures of tournament play.

“I am confident that the structures we have established via the collaboration between the HKRU and HKSI will benefit not just rugby but Hong Kong sport for years to come. The staff at the Institute and the Union are dedicated, professional and highly capable of ensuring Hong Kong rugby maintains its positive trajectory.

“I am also confident that under assistant coach Jevon Groves the transition for the men’s sevens squad will be a smooth one and that Hong Kong will not lose a step in preparing for what could be a pivotal year for Hong Kong’s sevens aspirations,” Baber added.

HKRU Chairman Pieter Schats commented on Baber’s departure saying, “We are highly appreciative of Gareth’s efforts during his time with the HKRU. His energy and technical expertise have helped Hong Kong reach new levels in our performance. We thank Gareth for his commitment and contribution and wish him the very best in his future endeavours.”

Dai Rees, General Manager of Performance Rugby at the HKRU, spoke about Baber’s new role saying, “It is a big loss for Hong Kong, but also a great opportunity for Gareth and one that is well deserved. Gareth has been an important part of our growth for the past three years and has left a strong imprint on the local game.

“The appointment is a testament to both the HKRU and Gareth, and positively reflects the quality of the HKRU’s world-class coaching resources, with Fiji obviously recognizing Gareth’s qualities both as a coach and as a man.

“It is a blow, but also a positive recognition of what we are achieving in Hong Kong and will help further shine a spotlight on the HKRU globally,” Rees added.

Baber’s appointment to lead the in-form team in world sevens to the next Olympics is further evidence that the HKRU coaching tree is one of the strongest in the game, a fact that was further evinced by Leigh Jones’s appointment as a coach with Japan for their inspirational Rugby World Cup run in 2014.

“Gareth leaves behind a solid team assembled by the HKRU with former Wales Sevens captain Jevon Groves coming on board as an assistant coach for the men’s team before this year’s highly successful Asian Sevens campaign. Jevon’s familiarity with the players and our structures will help ensure a seamless transition as we move ahead into the next stage of international competition early next year,” Rees added.

Rees also noted that Baber’s appointment would further strengthen ties between Fiji Rugby and Hong Kong, long a home-away-from-home venue for the Fijians in international sevens. As proof of the deepening ties between the two unions, prior to Baber’s appointment, Hong Kong had confirmed that it will visit Fiji in January as part of its build-up campaign for April’s Cathay Pacific/HSBC Hong Kong Sevens.

The Hong Kong Rugby Union (HKRU) was founded in 1952, and became an affiliated union of World Rugby in 1988. In 1968, the HKRU became a founding member of Asia Rugby and remains committed to the development of the game in Asia. The HKRU has hosted the world-famous Cathay Pacific/HSBC Hong Kong Sevens since 1976 and remains the only Union to have hosted two sevens World Cups in 1997 and 2005. In 2008, the HKRU hosted the first ever neutral venue Bledisloe Cup – hosting a second match in 2010. In 2013, the HKRU hosted the first British & Irish Lions match played in Asia and the following year hosted the first regional Olympic qualifier tournament for Rugby Sevens. The HKRU is a member of the Sports Federation & Olympic Committee of Hong Kong, China and provides competitive and social rugby opportunities for men and women at every age and skill level, with a thriving community of over 10,000 players. To learn more please visit www.hkrugby.com, www.facebook.com/hkrugby and twitter.com/HongKongRugby.