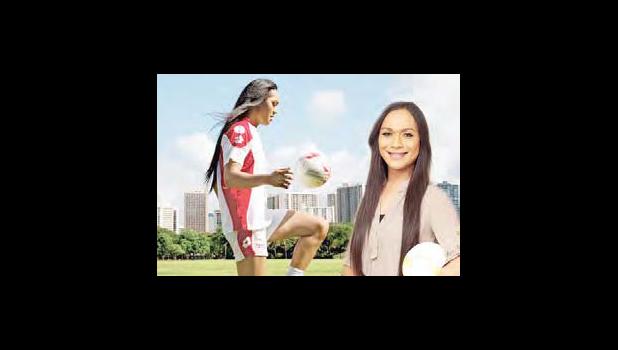 Twenty-eight-year-old Jaiyah Saelua has become a trendsetter, continuously making history in the world of soccer.

Five years ago in 2011, the Federation Internationale de Football Association (FIFA) – the international governing body of association football, futsal, and beach soccer – recognized Jaiyah for being the first transgender to openly play on a men’s team in an official FIFA-sanctioned tournament, a world cup qualifier. This was documented in a film called “Next Goal Wins.”

Earlier this year, Jaiyah was selected to be a juror on a panel for the first ever FIFA Diversity Award.

Last week, Jaiyah made history once again, becoming the first open transgender to grace the cover of a FIFA magazine. Next month’s issue of the FIFA 1904 Magazine, the publication’s 9th edition, will feature Jaiyah on the cover.

Earlier this year in January, according to Jaiyah, the FIFA 1904 Magazine replaced the organization’s old magazine, and its new name serves as a nod to the year FIFA was born.

“The new magazine is longer than the previous one, and features more in-depth stories with more diverse content, in an effort to reach a more diverse audience,” Jaiyah shared.

The September issue will feature information on the inaugural FIFA Diversity Award, of which Jaiyah is a jurist. “It will include the Top 3 nominations as voted on by the panel of jurors,” collectively known as the 11 For Diversity, said Jaiyah.

The first FIFA Diversity Award will be presented during the 2016 Soccerex Global Convention in Manchester, UK on September 26.

“I am so proud that the IGLFA – the American organization that I was with in Portland two weeks ago, thanks to Nike, made it to the Top 3,” Jaiyah said. “The other two nominees are ‘Slum Soccer’ from India and ‘Kick It Out’ from England,” she continued.

Next month’s issue of the FIFA 1904 Magazine will be printed in English, German, Spanish and French, and will be available for distribution in various countries around the globe. “Wow! What an honor!”Jaiyah exclaimed.

“I am so grateful for this journey,” she said. “None of this would’ve been possible if it weren’t for my home federation, the FFAS (Football Federation of American Samoa). That is where it all began, and without the FFAS, I wouldn’t be doing any of this. I love you FFAS.”

Jaiyah lives in Honolulu, Hawai’i. She told Samoa News yesterday that her ultimate goal in life is to build a career either with the FFAS, the OFC (Oceania Football Confederation), or directly with FIFA.

“I want to focus on developing the sport of soccer in the Oceania region, mainly American Samoa,” Jaiyah wrote via email to Samoa News.

“Ten to twenty years from now, I want to be stable in my career, with a husband and possibly children,” she added.

She said, “Fa’afafine come from a culture that respects us. It isn’t hard for young fa’afafine to find inspiration because we all live comfortably in a society and communities that are generally very accepting of us.”

Jaiyah concluded, “The more successful older fa’afafine are, the more the younger fa’afafine will look up to them and be inspired to work hard for what they are passionate about.”