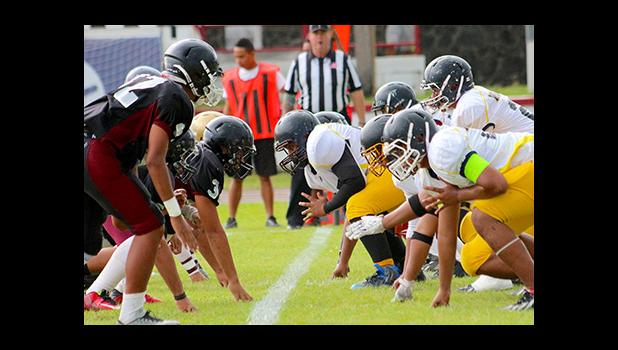 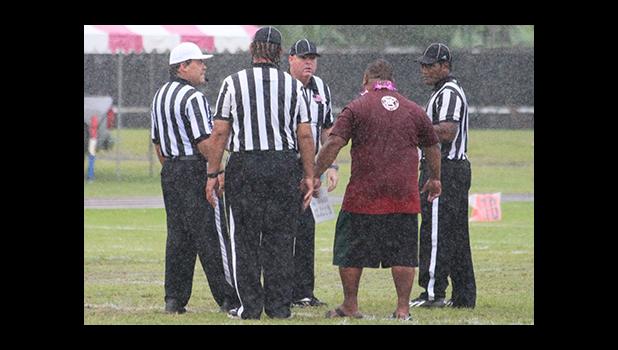 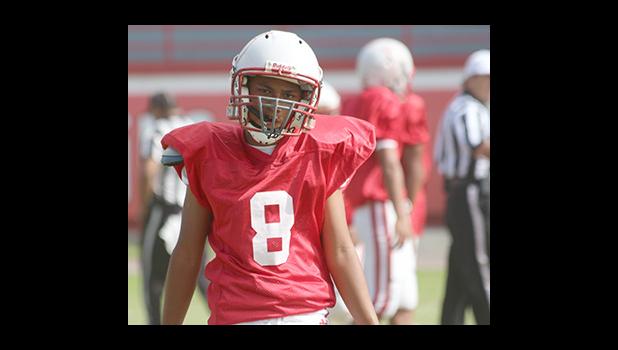 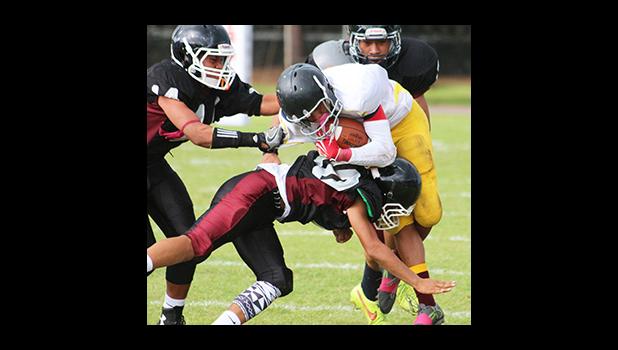 This past weekend at the Veterans Memorial Stadium, the American Samoa High School Athletic Association (ASHSAA) fifth week of high school football action, which started Friday evening, saw a shocking win from the lowest seed in the division, who stunned the No.1 seed in Junior Varsity competition, Tafuna Warriors.

While, on a rainy and drenched football weekend, the Samoana Sharks JV football program collected their second victory of the season as well, after a remarkable air raid gameplay by the Sharks, highlighted their best players — including wide receiver Jurgen Krusen, who leads the JV division in most touchdown catches.

Friday night lights last weekend featured the lowest ranked seed in the JV Division scoring the first touchdown of the game, late in the opening quarter on a rainy and muddy Friday evening.

Nu’uuli converting a fortunate first down situation on Tafuna’s 45-yard line after a controversy between the officials and Warriors Head Coach Kolose Ili about the call – the Wildcats executed a simple inside hand off to Nu’uuli’s (#2) who immediately stormed through the middle and slipped into the end zone, giving the Wildcats the upper hand and an early six point lead against Tafuna.

The ball game went into halftime with the Warriors struggling against Jeffery Tago and the Nu’uuli’s defensive unit.

The second half of play saw Tafuna’s Panapa Filoiali’i plowing through Wildcat defensive players, as he desperately tried to carry the Warriors to the end zone — with the help of the ’Samurai’ Koison Ozu, the Warriors were able to tie the ball game.

Not for long though. Nu’uuli made a statement after Joseph Mauga broke out for not only a huge gain, but into the end zone for Nu’uuli’s second touchdown of the game, as he gave Nu’uuli the lead with a six-point advantage. Their two-point conversion in the hands of Uriah Te’o had Nu’uuli sitting comfortably with a 14 - 6 lead.

Late in the ball game, a desperate Tafuna Warriors trying to keep a clean record going into the second round of competition, managed to score again with the help of Filoiali’i – but it still wasn’t enough to save them the embarrassment of losing against the lowest seed in the division.

The second game of last Saturday’s triple header was the action packed JV showdown between the two east side football teams, the Faga’itua Vikings and the Samoana Sharks.

Samoana’s Anthony Feala led the Sharks to their first touchdown of the game, after a daring pass to the double covered Jurgen Krusen – but Krusen was able to break free and secure the catch to put the Sharks on the board first.

A frustrated Heini Ta’ase and his Vikings offense, struggled against Samoana’s pass rush – but their ground game worked out successfully with the help of Georgia Mag

Sadly for Faga’itua, that was their only end zone appearance of the match – but Krusen and Feala, continued to put in work, as they hooked up for two long passes as Krusen led Samoana to another victorious weekend, after luring in two touchdown catches — Samoana won 26 - 8.