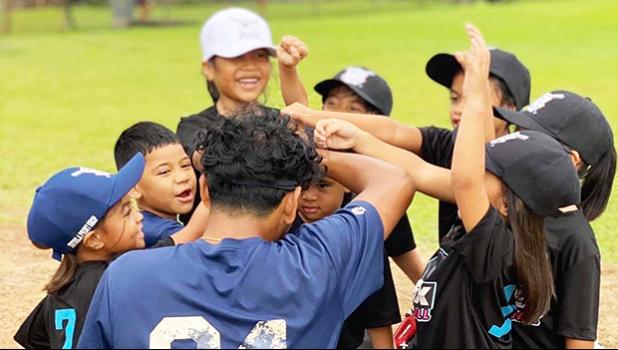 Pago Pago, AMERICAN SAMOA — With the excitement for little league baseball and softball growing in American Samoa, recent baseball alumni are adding to the buzz and optimism for the future of the sport. Little league and Community Empowerment Organization president, Saipai Cassens and her team, have been hard at work networking with off-island connections to secure opportunities for local baseball and softball players.

This August, two local Samoan baseball players, Paul Cassens-Hunkin and Isley Tautolo-Samuelu, will be traveling to California to attend and play for West Los Angeles College, with the team’s first official game in September.

They are not alone, next year 3 softball girls and 2 baseball boys will be following suit. Currently, they are training and prepping for the next level with six others under Army Veteran, Coach Vaimalu A’etonu, who is also the Vice President of the Community Empowerment Organization and the District Administrator for American Samoa Little League.

Cassens said, “We have some of the most athletic students in the world, and our baseball players just need a fair chance to showcase their talent. With better training and more playing time, we’re confident our players will eventually earn a scholarship, get their degree, and continue into the professional ranks.”

Saipai has been working closely with another baseball player from the village of Fagaalu and graduate of Samoana High, class of 1996, Robert Pene. Pene was the first on-island baseball player to receive a full scholarship in baseball. He has continued to work with other athletes in the United States and hopes to help increase the number of scholarship players in the future.

“Baseball and softball in the US is highly competitive, but if we give our Samoan athletes proper training and attention, they’ll succeed at a high level. We’re excited to help create a pipeline for future players to go to college through baseball and softball, directly from the island.”

Saipai and her team have exciting plans for the future of baseball and softball. Paul and Isley are the first of many who will travel to the mainland to attend college and pursue their dreams of playing at a higher level. Her team is currently working on a plan to develop the younger players so they are constantly training, showcased, and can earn their scholarships when they are juniors and seniors in high school.

Paul Cassens-Hunkin played for Leone High School under his father, Isaiah Hunkin and Coach Vaimalu. He is the son of Saipai Cassens and Isaiah Hunkin.

Isley Tautolo-Samuelu played for Tafuna High School, under Coach Laau Laulu and his wife Alva Laulu, and is the son of Stephen Samuelu and Carol Tautolo.

Both Paul and Isley are volunteer coaches and umpires for American Samoa Little League and have spent countless hours helping the development of young athletes locally.

They both graduated in 2020 with honors, were both awarded Student Male Athletes of their graduating classes, and were accepted and awarded academic scholarships to numerous universities and colleges across the nation. Paul will be majoring in Electrical Engineering while Isley will be majoring in Business. They are looking forward to representing American Samoa on and off the baseball field to the best of their abilities.