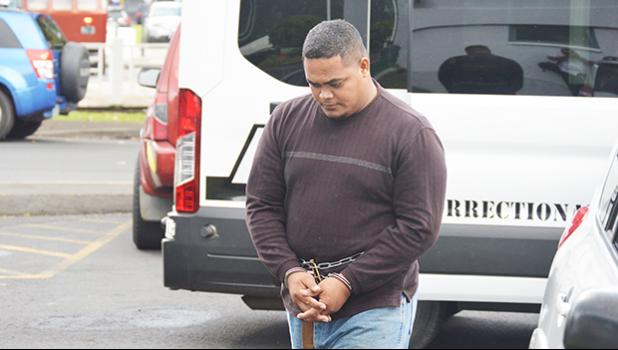 Pago Pago, AMERICAN SAMOA — A man accused of beating his wife to death during a domestic violence incident last week is now charged with first degree murder, a crime that carries a life imprisonment term. He’s also charged with attempted arson in the first degree, a felony, along with three misdemeanor charges, including third degree assault and two counts of endangering the welfare of a child.

Amosa Lautaimi told investigators that he planned to kill his wife because she had been cheating on him for many years.

Lautaimi, who was convicted by the District Court last year on the charge of disturbing the public peace (PPD) involving domestic violence, made his initial appearance before Judge Elvis P. Patea yesterday morning.

He is held in custody without bail.

Preliminary examination is set for Wednesday next week, Apr. 1 at 1:00p.m.

Several police officers responded to a domestic violence case in Nu’uuli on the early morning of Mar. 19, 2020 after the Tafuna Substation received a call for help.

Police officers rushed to the house and were able to remove the couple’s children for their safety. The victim was later transported to the LBJ Hospital for further treatment where she was admitted to the Intensive Care Unit (ICU) with severe injuries.

When police entered the house, they observed the suspect standing inside the room with a propane tank beside him while the room was on fire. Officers were able to get the propane tank outside, subdue the suspect, while at the same time put out the fire.

The suspect was then transported to the Tafuna Substation for questioning.

On the following day, the suspect was warned of his constitutional right, which he waived and decided to give a written and a verbal statement to investigators in regards to the alleged incident.

The suspect began by saying that he really loved his wife and regretted what he had done, adding that they have been married since 2011 and have five children.  He noted that over the past five years, there have been marital issues. They argued at times because he suspected that his wife was cheating on him and she was having an affair with one of her uncles, her boss, and random guys.

Lautaimi explained in detail to police investigators the ways he checked his wife’s private parts to confirm if she was having sex with other men.

He also said that his wife’s family was always taking her side whenever they had a disagreement, including one incident where he and his wife had an argument, and his mother-in-law allegedly punched and slapped him in the face.

The suspect further showed investigators a picture of his children and stated that he knows that those children are not biologically his because they do not look like him.

According to the suspect, it had been four weeks since he and his wife separated. He was living with his parents in Tafuna, while his wife stayed in Nu’uuli with the five children.

On the evening of Wednesday, Mar. 18, 2020 around 6 p.m. he said he went over to Nu’uuli and invited his wife and children to dinner. They had dinner at Carl’s Jr. and at around 9 p.m., his wife took him to his home in Tafuna. Shortly after arriving home, he made a video call to his wife via messenger. His wife answered, but kept muting the call several times. He asked her why she was doing that and she replied that she was tired. After he hung up, he suspected that she was with another guy at her home.

Later on, he went to bed around 11p.m, but around 3a.m on the next morning, Thursday, Mar. 19, the suspect stated that he woke up so early because his wife was heavy on his mind. At that time, he realized that the only way to deal with his situation was to kill his wife, then kill himself. He planned to be at the house in Nu’uuli without his mother-in-law there, and between 6-7a.m. was the perfect time since the mother-in-law would be taking the children to school.

At around 6 a.m,, he put a hammer (mini sledge hammer) inside his backpack, a scalpel and a box of matchers. He called a taxi that took him to Nu’uuli to his wife’s house. Upon arrival, the suspect told investigators that he walked inside the house and saw his wife sleeping in a see-thru dress, on a bed in the living room.

He believed he noticed the strong odor of sex on his wife, and her lips were swollen, her eyes were bloodshot red, as if she had been up all night having sex. His wife sat up and walked into their bedroom. He then followed her inside the room.

When they were inside the room, the suspect stated that he knelt in front of his wife and begged her to please, allow him back home because he wanted their family to be connected again.

However, instead of responding in a good manner, the wife allegedly pushed him against the wall, and punched and slapped his face.

According to the suspect, that is when he immediately stood up with anger, grabbed the hammer and allegedly struck her on the left side of her head, which caused her to fall on the floor, on her back. He struck her again on the same area a couple more times before his wife’s younger brother opened the bedroom door.

The suspect turned back to his wife and continued to throw punches, using his fists on her facial area, about three times. He then walked outside to where the stove was located, dropped the hammer there and yanked the propane gas tank that was connected to the stove with a rubber hose.

He walked back into the bedroom while holding the propane gas tank with his right hand by the handle, raised it up, used his left hand to support the gas tank for a stronger grip and struck her on the right side of her head.

After hitting her twice on the head with the gas tank, he sat on her left side, cupped his wife’s head on his lap and cried. He twisted the gas cylinder valve to release the gas on his wife, grabbed the box of matches from his pack bag, lit it and set the fire.

The suspect told investigators that his wife was faintly moaning during the ordeal but he did not feel anything because he wanted to die with his wife.

According to the suspect’s statement to police, his one-year-old son was on the bed located in the living room during the entire time he was beating his wife.

The wife’s brother sustained swelling on his forearm, but no lacerations or broken bones.

The victim is a 29-year-old mother from Nu’uuli.