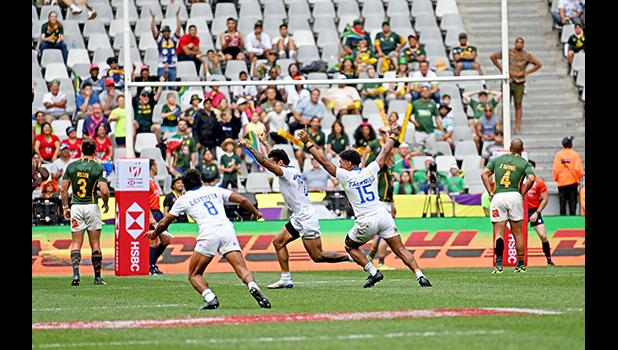 Cape Town, REPUBLIC OF SOUTH AFRICA — After an amazing day one at the HSBC World Rugby Sevens Series event in Cape Town on Friday, we knew day two on Saturday was going to be good.

And here's a recap of just how good it was...

MEN’S POOLS GO TO THE WIRE

All four of the men’s pools were tight with matches two and three being played by all teams on day two.

In Pool A, South Africa had beaten Canada on Friday evening and they backed that up to be the only team winning all three matches pre-knock-out.

South Africa then went 7-0 down to Fiji early on, but roared back with tries from Shilton van Wyk, Muller du Plessis and JC Pretorius to take this one 17-7.

Later in the day, Fiji took out their frustration from that game on Canada, beating them 36-17 with tries coming from Filipe Sauturaga, Paula Nayacakalou, Pilipo Bukayaro, Manueli Maisamoa (2) and Waisea Nacuqu.

South Africa than kept their 100 percent record intact when they saw off France 26-7, du Plessis, Dalvon Blood and van Wyk (2) with the tries.

That all meant that South Africa, as Pool winners, and France went through to the Cup quarter-finals.

Day two in Pool B opened up with Samoa thumping Japan 45-0 and then Uruguay caused a big shock by defeating Ireland 22-19.

The tries for the victors came from Diego Ardao, Mateo Vinals and Ignacio Facciolo (2) with Guillermo Lijtenstein kicking a conversion to give them a famous triumph.

Later in the day, they took confidence from that performance to beat Japan 33-5, Tomas Etcheverry, Ardao, Vinals, James Mc Cubbin and Facciolo with the tries.

Converted tries by Mark Roche, Hugo Lennox and Harry McNulty gave Ireland a 21-14 win over Samoa as those two teams and Uruguay all finished on seven points.

In the end, Samoa, as Pool winners, and Uruguay went through to the Cup quarter-finals.

Pool C kicked off the men’s action on day two and Argentina got the better of Spain 26-0, Alejo Lavayen, Matías Osadczuk and Agustin Fraga (2) scoring their tries.

Kenya and Spain then drew 5-5 later in the day, Eduardo Lopez opening the scoring for the latter and Nelson Oyoo replying for the former just after half-time.

Then, in one of the games of the day, New Zealand managed to edge out Argentina 21-15.

A late Solo try, converted by Rokolisoa, got them over the line and it meant that they topped the Pool with Argentina second and both progressed to the Cup last eight.

Pool D began on day two with two comprehensive wins, Australia seeing off Uganda 31-0 and then USA getting the better of Great Britain 36-5.

A late unconverted try from Henry Hutchison then gave Australia a 19-19 draw with USA.

That all meant that USA, as Pool leaders, and Great Britain were through to the Cup quarter-finals with Australia finishing third.

Each country just had one Pool match left to play on day two in the women’s event.

France then put in a cracking performance - with tries from Alycia Chrystiaens, Chloé Pelle, Yolaine Yengo, Camille Grassineau and Lucy Hapulat - to get past USA 31-5.

That meant that France, with two wins and a draw, topped the Pool with USA joining them in progressing to the Cup last eight.

Pool B was next up and after Great Britain had got the better of Brazil 29-5, New Zealand and Fiji played out a classic tie.

Fiji led 14-12 at the interval, but second half tries by Risi Pouri-Lane and Jazmin Felix-Hotham along with two conversions from Tyla Nathan-Wong got New Zealand over the line 26-21.

That meant that New Zealand, with three wins from three, went through to the Cup knock-out phase as Pool winners and Fiji were second.

Eva Aguirre Diaz (2) and Marta Cantabrana Gil scored tries as Spain concluded their Pool A campaign with a 17-14 win over South Africa.

That meant that Australia, who had not conceded a point in three ties and had scored 119, topped the Pool emphatically with Ireland joining them in the quarter-finals.

After all the calculations were done, Great Britain and Canada, from Pools B and C respectively, were the two third placed teams also heading into the Cup knock-out phase.

Next up came two much closer matches.

Firstly, Ireland edged past France 12-10. Tries by Amee Leigh Murphy Crowe and Beibhinn Parsons and one conversion by Lucy Mulhall put the Irish 12-0 up, but France came fighting back with unconverted scores from Camille Grassineau and Alycia Chrystiaens.

Australia still have not conceded a point in this event after they swept aside Great Britain 38-0 in the final quarter-final tie.

All of that means that New Zealand and Ireland will meet in the last four and USA will take on Australia on day three.

Moses Leo led the way with a hat-trick of tries as New Zealand defeated Uruguay 50-0 in the first Cup last eight tie.

Caleb Tangitau scored two tries and Che Clarke and Roderick Solo also crossed for the victors, but Uruguay can hold their heads high for getting this far.

Tuna Tuitama (2), Paul Scanlan and Vaa Apelu Maliko scored tries for Samoa in the second quarter-final as they got the better of Argentina 22-10. Rodrigo Isgro and Agustin Fraga were the try scorers in defeat for Argentina.

An early try from Manueli Maisamoa which was converted by Waisea Nacuqu gave Fiji a 7-0 lead versus USA next up early on.

However, USA found their form in the second period and tries from Joe Schroeder, David Still and Malacchi Esdale - along with one conversion from Steve Tomasin - saw them progress to the semi-finals 17-7.

With the home crowd behind them, South Africa then took on Great Britain in the last match of day two.

Ryan Oosthuizen’s try converted by Ricardo Duarttee gave South Africa a 7-0 advantage before Morgan Williams scored, converted by Tom Emery, made it 7-7 at the break.

Duarttee’s seven pointer early in the second half had South Africa up again before Femi Sofolarin replied in kind and it was 14-14 with a few minutes left.

Dalvon Blood was the man who scored the winning try for the home side, Duarttee converting as they progressed 21-14.

In the semi-finals it was New Zealand over USA and Samoa downed South Africa on day three.

WHAT’S YET TO COME ON DAY THREE?

Both the men’s and women’s events will come to a conclusion and will round off a brilliant three days in South Africa and draw a line under an amazing 2022 in sevens in general.