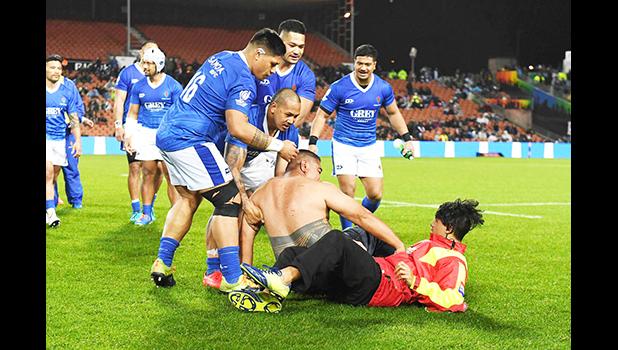 Hamilton, NEW ZEALAND — The Manu Samoa had just officially qualified to take part in the 2023 Rugby World Cup after beating Tonga's 'Ikale Tahi rugby team 37-15 in Hamilton last Saturday night when a seemingly rogue rugby fan storms on to the pitch, a security guard sprints towards him and brings him to the ground with one impressive tackle.

But what happens next is probably something not many were expecting; as members of the Manu Samoa rugby team rush forward to help the fan, and then the security guard, up from the ground.

As the fan — shirtless and showing off a traditional Samoan pe'a — stands up, he starts to dance just as another security guard rushes up to grab him.

Again, the boys in blue appear to defend the member of the public and offer some explanation to the guard.

The guards eventually back off — with the first one sheepishly scratching his head as one of the players comforts him.

Some people have questioned why the players were quick to defend the man the security guard had just tackled.

However, Samoan fans have started to offer some explanation. The fan was simply responding according to normal cultural protocol.

"I mean I understand the security guard is just doing his job, but he don't [sic] know us Samoans.

"That's how we celebrate and show respect. We join in dance and celebrate together. The players know this ..."