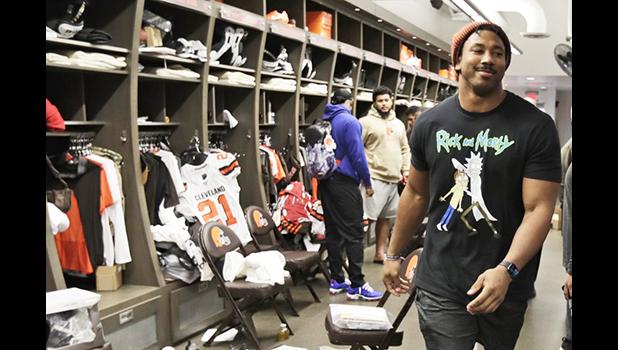 (AP) — The NFL is taking baby steps toward full reopenings for its teams. It has no other choice.

No long throws downfield. Mostly halfback dives into the line.

There are so many issues that must be addressed with the opening of team facilities across the nation. Just because a handful of clubs returned executives and other staff — no coaches or players — to their complexes on Tuesday does not foreshadow a quick return to business as usual. Or close to it.

For one thing — a very major thing — there’s competitive balance to consider.

“Competitive issues are always important and they always are considered in a way to try to preserve equitable treatment of all 32 clubs,” said Jeff Pash, the NFL’s chief legal counsel. “And certainly, our goal will be to have all 32 clubs operating on a consistent basis.”

Here are some of the challenges the teams face at a time when organized team activities (OTAs), followed by June on-field minicamps, would have been taking place.

At least a dozen franchises had no chance to begin the reopening process this week because state or local municipalities barred it. All four California teams — the Raiders still count because their current training facility is in Alameda — and both New Jersey clubs fall in that category.

“We are not opening up,” Ravens President Dick Cass said Tuesday. “In Maryland, we are deemed to be a non-essential business. Under local and state regulations, we remain closed and we will remain closed until the governor permits us to open up. Right now, it would be great to have our players back. But I don’t see that happening anytime soon.”

As Dr. Allen Sills, the NFL’s chief medical officer, noted during a conference call following the team owners’ virtual meeting Tuesday: “We’re not putting dates on the calendar at this point” concerning getting coaches and players into team complexes.

“We feel there are certain important steps that need to occur with regard to testing, with regard to test availability, with regard to test reliability, and our continued evolution of understanding about how to manage exposure,” he added. “All of those things continue to evolve, and when we and the players association together feel like we’re at a point of satisfaction with that science, then we’ll be ready to move forward.

“We’re moving as fast as the science and the data takes us.”

Cass was willing to put a time frame on it — somewhat.

“We believe by the time of training camp (late July), we’ll be able to test players and coaches multiple times a week, and be able to get the results fairly quickly,” he said. “I think there’s a really good shot that we’ll be OK.”

This could be the most difficult task of all.

Consider the need to spread out dressing stalls, for example. Normally, players are practically shoulder to shoulder in locker rooms. Indeed, in training camp, makeshift lockers are installed to accommodate the extra load.

After stringent workouts or practices, many players head for the tubs. When one is done, another soon climbs in.

There’s no way that will work any longer. Teams must consider installing more tubs and separating them. So add plumbers and contractors to the list of folks in facilities.

Same thing for the ever-popular weight room, which often has two dozen or more players at work. Schedules for who can be in there and when must be compiled. Equipment managers and even trainers will be charged with frequent disinfecting chores.

Meeting rooms are designed for large groups, making social distancing a huge challenge when coaches and players can actually hold those get-togethers.

“The hope around the league is that Phase 1 of reopening demonstrates our ability to operate in a safe manner, allowing more staff (including coaches) to gradually return to the office soon,” Broncos President Joe Ellis wrote in a memo to organization members.

“Although there is currently no set timeline for when this next phase of expanded facility access could begin, we should remain prepared in the event that it occurs in the very near future.”

After many baby steps are taken.