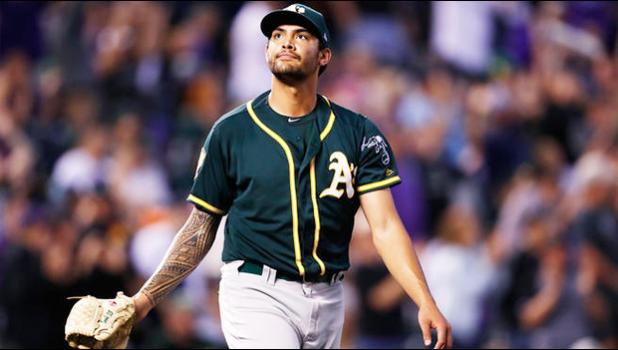 Source: NBC News
Manaea, a left-hander with a career record of 35-28, became the 12th pitcher in Athletics franchise history to throw a no-hitter last season.

Oakland, CALIFORNIA — A Major League Baseball player of American Samoan descent is about as rare as, well, a Samoan in a small Indiana town.

Yet both descriptions apply to Oakland Athletics pitcher Sean Manaea, 27.

His father, Faaloloi Manaea, is an American Samoan who met Sean's mother, Opal, while stationed in Indiana during the Vietnam War. That's how Sean ended up being born and raised in the state, even attending Indiana State.

Besides Manaea, there have been less than a dozen players of American Samoan descent in Major League Baseball's century-plus history, according to the Society for American Baseball Research.

Manaea, a left-hander with a career record of 35-28, became the 12th pitcher in Athletics franchise history to throw a no-hitter last season. This season, his fourth in the majors, he came back from shoulder surgery without missing a beat, going undefeated in the month of September.

That earned him the honor of starting the A's elimination wild-card game on Wednesday at home against the Tampa Bay Rays.

In some ways, Manaea, at 6-foot-5 and 245 pounds, is accustomed to standing out. Growing up, his was the only Samoan American family in Wanathan, Indiana, population just over 1,000.

"My dad, my two brothers," he said, listing the sum total of Samoans present during what he described as his “normal Indiana childhood."

On the flip side, when he visited American Samoa for the first time in 2014, Manaea said he felt like an outsider.

"That culture was kind of lost in my dad. He taught us some stuff, but not a lot," Manaea said. "When I went there, it was a little different, seeing full-blooded Samoans and how they do things."

Since that visit to Samoa, he has found a way to connect with his ancestral homeland.

"I started my sleeve when I went to American Samoa, tattoo artist Sulu'ape RiccyBoy," Manaea said of the Samoan symbols that adorn most of his right arm. "That was kind of one of the reasons I wanted to go out there and start my sleeve. Start something out there."

The word "tattoo" is even thought to originate from the Samoan word "tatau," and Manaea knew of the rich history of Samoan tataus, which can be traced over 3,000 years, before getting his.

He even hopes one day to be tattooed in the traditional, more painful way. This is the province of only the tufuga ta tatau (master tattooists), who hand-tap tattoos using bone, turtle shell and wood tools.

"I'll probably save that when I'm done with baseball," Manaea said. "Mine were just done with a machine, which still hurt."

The way that Manaea has been throwing, he's not likely to be done with baseball anytime soon.